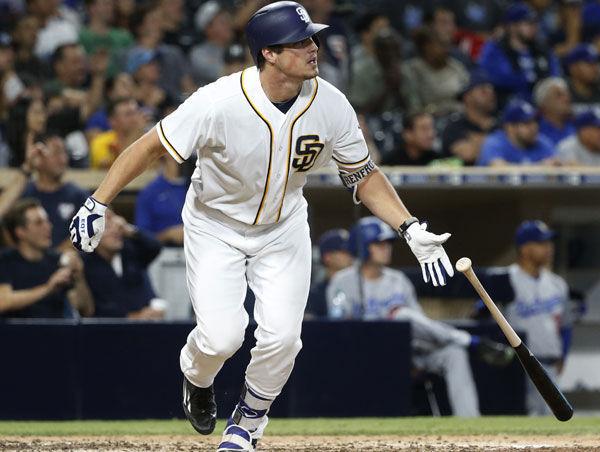 
It was another big day for the Blue Jays rebuild project 2019. Cavan Biggio, son of Craig Biggio, made his big league debut batting 8th and playing second base. Lourdes Gurriel Jr. also returned to the Blue Jays lineup -- in the outfield. I'm really hoping Gurriel Jr. doesn't go the way of Chuck Knoblauch, who like Gurriel Jr. experienced the yips on defense, including a stint in the outfield. Billy McKinney and Richard Urena were both optioned to Buffalo. Ryan Feierabend was DFA'd after two suboptimal outings. Elvis Luciano was placed on the bereavement list, and waiver wire pickup, lefty Zac Rosscup was placed on the roster. Finally, Thomas Pannone was also called back up. The Padres also recalled their #9 prospect, fellow Canadian Josh Naylor, who was DH'ing and batting 6th tonight. Could the Blue Jays take the opener of this weekend series Here is today's game recap.

Email ThisBlogThis!Share to TwitterShare to FacebookShare to Pinterest
Labels: game recap, San Diego Padres, Toronto Blue Jays
opinionator777
I am a graduate from SFU with a major in psychology and a minor in Health Sciences. I am a huge advocate for children w/ Special Needs. I'm a huge Canucks fan. As well I love watching baseball in the summer. I have an 8-year-old Havanese-Shih Tzu
Newer Post Older Post Home