Oh, there's a ballgame today?  90% of Toronto wouldn't even notice.  Blue Jays, who?

Marcus Stroman takes the ball today as the Jays look to avoid getting swept by the Padres.  Hotshot rookie and intense cowboy Chris Paddack Robbie Erlin is on the hill for the Pads, a late switch after Paddack was scratched with a stiff neck -- no wonder, he got whiplash watching the 7 HRs getting torched out of the ballpark in yesterday's game.

Well... I had some content here involving Chris Paddack, but he's scratched... so... Go Raptors?


#BlueJays place Tim Mayza on IL with firearm tightness — something to do with ulnar nerve — and promote Jacob Waguespack from Buffalo. Justin Shafer was summoned “just in case” but has not been activated.
— John Lott (@LottOnBaseball) May 26, 2019

Today's one-time Jay of the Day is ... Frank Catalanotto! 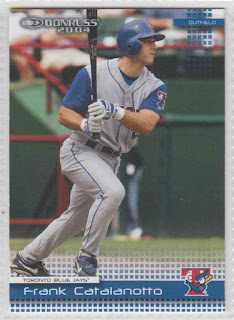 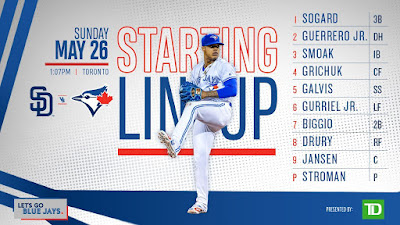 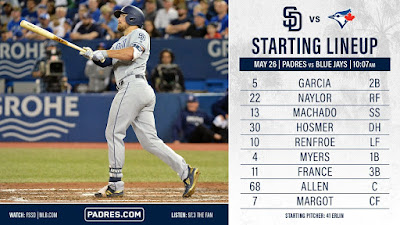 This is your "time to start winning now that the Raptors are off for a few days" game threat.
Posted by macgyver13 at 12:00:00 PM