Back to our regular gratitude post. I'm grateful I didn't have to go out into the storm Monday because the show I was to do that night was cancelled last month. I'm also grateful I have somewhere warm to be during this cold snap. Too many people don't.
Posted by mktoronto at 7:00:00 AM


Greetings, ladies and gentlemen.  As we bask in the glow of our first drafted-and-homegrown player to make the Hall of Fame, we know that Roy 'Doc' Halladay will always be ours, no matter what the HOF plaque says in July.  Blue Jays fans know it.  Most Phillies fans (idiot columnists notwithstanding) know it.

Harry Leroy Halladay III is a Hall of Famer.

Just amazing to say that.  I remember with pride the day Roberto Alomar was announced as a Hall of Famer and that he said he'd go in as a Blue Jay despite playing just five seasons with the club.  But it is an entirely different level with Doc being a Blue Jay from draft day as a teenager until he was traded to the Phillies after wearing the big league uniform for twelve seasons.

I can remember Doc's debut as a major leaguer (link here, and fun fact: Dave Stieb relieved Doc in the 6th inning) and, of course, the near no-hitter in his next outing.  I watched him "grow up" as a ballplayer, turning in one of the worst seasons in major league history and then gradually evolving into the legendary Doc persona where he developed his second-to-none work ethic, inapproachable manner on game days and bulldog mentality on the mound.  And he did it as a Toronto Blue Jay. 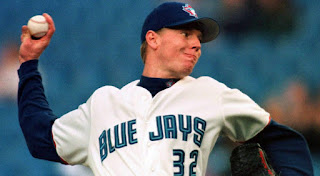 Doc in the Hall! 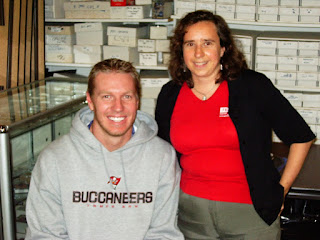 Yes, I'm posting the infamous Doc and me pic. Hope it doesn't come back and bite me in the ass!

This was prepped as another Gratitude post but as someone mentioned in the comments, this should be a tribute post. So here I am at 2:30 in the morning fixing it on the fly.

RADAR pointed out that it's now less than 30 days until spring training. So if you want, you can be grateful that soon there will be baseball and no more need for gratitude posts!

I'm currently grateful that Toronto is not buried in snow, nor in a deep freeze. I know this could all change tomorrow (hopefully not before this post goes up, which I'm writing on Tuesday afternoon) but I want to honour this moment as I'm writing.

EDIT: So of course, I go to the Weather Network site and find out there's a storm predicted!

Today, I'm grateful that after trying to get things to work since November, I finally got my new service out into the world yesterday. Didn't have the cash flow to pay for automation but cobbled together some free tools to have something to work with.

I am also choosing to be grateful for the cash flow I haven't seen yet. I'm trusting it will come. Just have to keep plugging away...

Guessing everyone is grateful 2018 is out the door?