After a day off in Colorado (hopefully, not to seek out legal pot shops in town), the Blue Jays look to remove the stench of a series sweep in Tampa and take on the Rockies in a three-game interleague series.  The Jays have an all-time record of 11-7 against the Rockies and won two out of three the last time the teams met in 2016, which featured Tulo's return to Colorado (yes, he hit a HR in that series).

Edwin Jackson takes a career 2-4, 9.63 record against the Rockies (including 0-3, 12.71 in Denver) into tonight's matchup against a rising star, German Marquez.  Marquez is going to be tough to matchup against, not just on the mound, but also at the plate where he's hitting .444 with 9 RBIs in the month of May.  These 9 RBIs are the highest total for a pitcher in any month since 1973.

Warm up the bullpen early, Charlie.

Another look at Jonathan Davis's incredible catch from the other day:

Every angle, every call, every replay of @3_JonathanDavis' CATCH OF THE YEAR candidate! pic.twitter.com/EYx6tS1oJB
— Toronto Blue Jays (@BlueJays) May 30, 2019

Today's one-time Blue Jay Canadian of the Day is ... Larry Walker!
Yeah, he wasn't a Jay, but he's Canadian and we're in his old stomping grounds tonight and also played for the Expos, so... yeah. 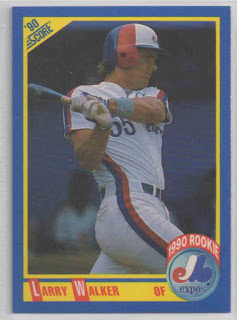 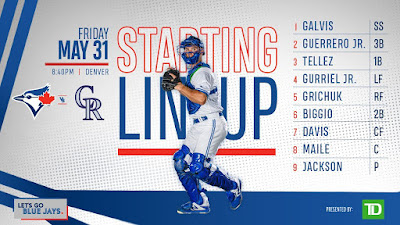