The Toronto Blue Jays limp into Arlington after getting their asses royally kicked by the below-.500 Trouts, looking to regain some semblance of a pulse beyond a don't-give-a-shit level.

Trent Thornton will look to avoid getting his ass kicked all over the ballpark and hold the Rangers long enough so that Thomas Pannone won't be needed in long relief and can start tomorrow.  Mike Minor is his mound counterpart tonight for the Rangers.

Moves afoot!  The loud cheers you heard about an hour ago was because Alen Hanson got DFAed.  In his place...

ROSTER MOVE: We've selected the contract of RHP Derek Law from the @BuffaloBisons and designated UTIL Alen Hanson for assignment.


We say howdy to an old buddy, Chris Woodward, who is in his first season as manager of the Texas Rangers.

A fantastic pitching performance today, one that will make Wince weep for hours:

Vlad is back in the lineup, fighting to keep his major-league career alive and avoid being DFAed: 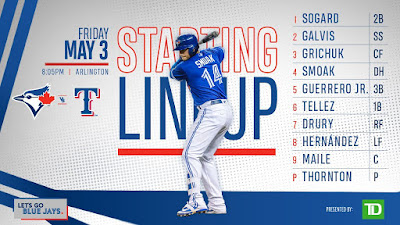 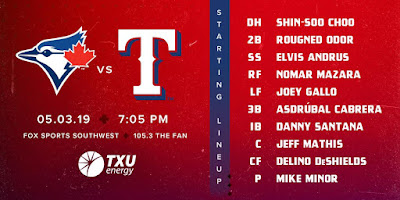