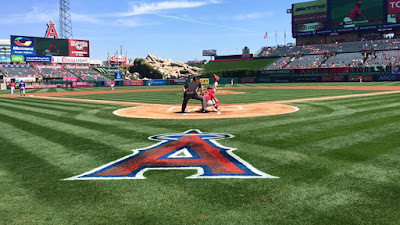 After salvaging the finale of a two-game series against the Atlanta Braves, the Blue Jays flew out to the West Coast to face the Angels in a four-game series to kick off a seven-game road trip.

Aaron Sanchez will be making his fourth appearance of his career against the Angels, but the first time he'll be starting at Angel Stadium, close to where he grew up in Barstow, CA.

Tonight is his 1,000th career game.  How does he compare with other MLB legends?  Trout is the 43rd to reach 1,000 games by age 26 and only Ty Cobb (181) and Mickey Mantle (176) have a higher career OPS+ than Trout's 175.  Still only 26, Trout has already surpassed 74 Hall of Famers in career WAR, including this year's enshrinee, Vladimir Guerrero, and other luminaries such as Yogi Berra and Mike Piazza.

Sportsnet brought this over from Baseball Savant -- this is perhaps the best chart I've seen that shows how dominant Trout has been in his career in relation to everyone else:

(And if you colourize 2018's numbers, the chart looks even more dominating)

And if you're wondering why Trout is the DH tonight instead of at his usual CF perch, he's been diagnosed with a sprained right index finger.  That should only slow him down ever so slightly - maybe he'll only hit about .500 vs. the Jays in this series.  He'll be evaluated in a few days to determine when he can go back into the field again.

Russell Martin and Devon Travis are both getting the night off, with Luke Maile and Lourdes Gurriel Jr. playing in their spots.

Tyler Skaggs was supposed to start tonight for the Angels, but was scratched because of right hamstring tightness.  John Lamb will go in his place.

Fangraphs currently has the Jays rated at about a 3% chance of making the post-season, but Jonah Keri questions whether the Jays should explore obtaining controllable starting pitching to bolster the rotation for when their top young guns make it up to the bigs (Guerrero, et. al).  He identifies potential targets such as Syndergaard, deGrom, Archer and Fulmer that the Jays could consider going after.  I could get on board with that line of thinking, but at what price?
https://www.sportsnet.ca/baseball/mlb/blue-jays-deadline-buyers-controllable-starting-pitching/

Our old friend Cletus (Colby Rasmus for those of you who weren't around when he was a Blue Jay) just hit his first HR as an Oriole.  Have mercy on his soul... he's really scraping the bottom of the barrel if he's playing with the LOLs.

Chris Young?  How about Chris Old: 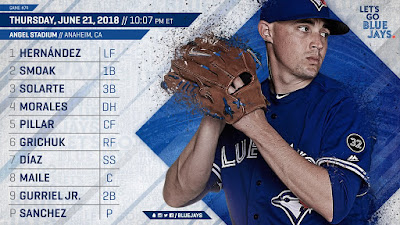 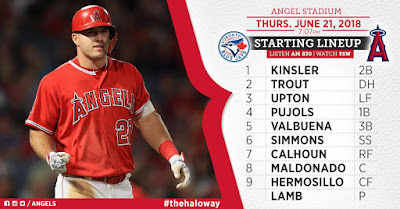 This is your late-night Trout-viewing game thread.