After some indifferent play in the field and then a meltdown from Seunghwan Oh, the Blue Jays blew a 4-2 lead to lose 7-4 for their umpteenth loss in a row.

Today, two struggling pitchers face off on the mound to see who can out-stink the other and hand their opposition the win.  Two years ago, this would have been a great matchup of budding star pitchers.

Teoscar Hernandez is out with a dinged foot after fouling a ball off it in yesterday's game.  X-rays were negative, so he ought to be good'n'ready for Tuesday's game.  Then again, it's 2018, so who knows?

Get a load of these injury updates (from Keegan Matheson's feed):

I mean, what the fuck... these sound more like old people getting ready to walk again in time to join the retirement home lawn-bowling tournaments.

The #Yankees rained out once again and pleading with #MLB to alter plans for them to play July 8 ESPN Sunday night game in Toronto with doubleheader scheduled next day in Baltimore, meaning three games in less than 30 hours in two cities
— Bob Nightengale (@BNightengale) June 3, 2018


Since it's getting depressing mentioning Blue Jays facts, let's go with ....

Javier Baez just hit his 5th career HR in the 12th inning or later.  He's got 5 such HRs at age 25; Hank Aaron only hit two in the 12th or later in his entire career.

How good is the Astros' starting rotation?  Combined, hitters are slashing .196/.260/.330 off the Astros' five man unit.  That's historically good - if that was a single (non-pitching) hitter for his career with at least 600 plate appearances, that would be the third lowest batting average in the history of baseball.

Shohei Ohtani has a chance to do something that hasn't been done in 100 years:  hit more HRs than given up as a regular starting pitcher.  Ohtani's at 6 HRs hit, 5 HRs given up.  The last time this was done was by Babe Ruth, of course, who hit 29 and gave up 2.

Manny Machado has a chance to do something really special -- that is, if he doesn't get traded.  He's hit 18 HRs and the LOLs have won 17 games.  No player in history has hit more HRs than his team has wins.  The closest was Sammy Sosa with 63 HRs for a 67-win Cubs team and Wally Berger with 34 HRs for a 38-win Braves team. 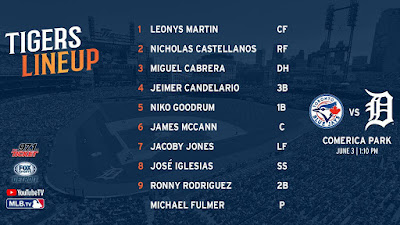 The Tigers deserve the nice lineup look; the Jays don't until they start winning again.  So there.