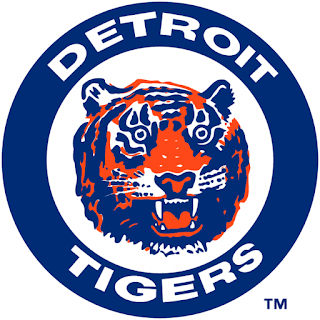 The Blue Jays won the series opener last night with a strong start from Marcus Stroman (his first W of the season!) and a two-run HR from Justin Smoak.

It was the Tigers' 10th straight loss, their longest since the 2003 season when they lost an unfathomable 119 games.

By contrast, after a rough spell at home, the Jays have won 9 of their last 10 in the Sauna.

The Tigers are apparently employing a strategy of sending up former Jays lefties to try and overcome their streak.  So far, they're 0-1 with that strategy, and it could very well be 0-2 as Boyd is a career 0-3, 8.66 in four starts at the Rogers Sauna.


NOTES:
With the extreme heat out there, the roof is closed for today's game, so be prepared for even more sauna-like conditions inside the building.  Water stations have been set up in several areas to help fans cool off.

It's Saturday morning, so it's time for some Jayson Stark crazy info.

Now that Edwin Jackson has been traded to the A's, his 13th team, he now has had 763 teammates in his career.  It'd have been more if he spent longer than an hour with the Blue Jays in the Cletus Rasmus trade of 2011.  That total of 763 is second to Terry Mulholland (791).  Interesting fact - if he starts when the A's faces the Giants twice in July, he will have pitched to Andrew McCutchen in eight different uniforms.

Chris Gimenez is the first position player to pitch 10+ times in his career without a single season of 10+ pitching appearances since Jimmie Foxx from 1939 to 1945 (no doubt because of a dearth of quality pitching due to the war years).

The Reds had a pitcher (Anthony DeSclafani) hit a grand slam one day and then another pitcher (Michael Lorenzen) hit a pinch-hit HR the next day.  #PitchersWhoRake 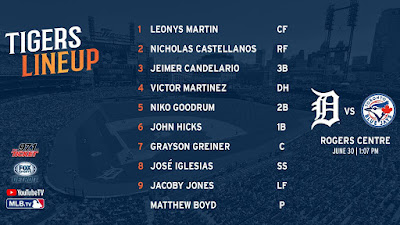 The Blue Jays annoy me.  The Tigers have had their lineup up for a hour now, but the Jays' lineup still isn't posted.  Just like yesterday when the Tigers had theirs up for two hours before the Jays did.

So... they get the half-assed treatment for now - I'm posting their lineup from yesterday since there's another lefty on the mound, with one predicted change from Martin to Maile at C: