After an 11-4 win in yesterday's opener of a short series, the Braves look to sweep the Jays.  The Jays, meanwhile, look to get back on the winning horse again after sweeping the Nationals.

This should be a decent pitching matchup with current ace J.A. Happ going up against Anibal Sanchez, who has performed well in a small sample size so far this season.

This game is going to be aired exclusively on Facebook as a yet-another-fuck-you to fans that don't have Facebook (i.e. yours truly).  A further fuck-you to the fans:  A 12:37 game time.

Sam Gaviglio has been placed on the paternity list and Lourdes Gurriel Jr. has been called up.  Hearty congrats to Sammy as his wife gave birth to a daughter yesterday.

Here's a new one for you:  Brandon Morrow is hurt again -- that's not the surprising thing, but the reason is.  He strained his back while taking his pants off after a game.  Really.

There needs to be greater appreciation for guys such as Nick Markakis.  Other than the one season where he had a 7.4 bWAR, his overall WAR numbers season-by-season aren't overwhelming but just consistent.  I'll bet the average fan has no idea that he's got 2100 hits, 1000 runs scored, 450 doubles and 920 RBIs at the age of 34.  If he stays healthy and consistent for another five years after this one, he'll finish with 3000 hits, 1300 runs, 600 doubles and 1200 RBI.  Possibly the quietest 2000+ hits in baseball history.  Here's hoping he finally makes the All-Star team this season. 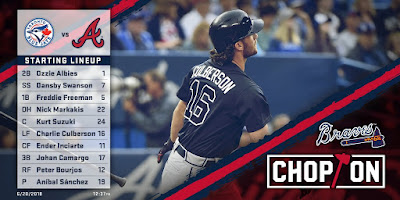 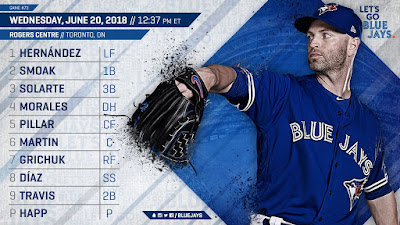 This is your "bring back the unsweepable mantra" game thread.