Pre Amble: We did it! We won a game! I think it is safe to say that the Jays may never lose again! We start our forever streak against Aaron Judge and the Knickerbockers...

Of Note: The first 2 rounds of the 2018 MLB Draft occured last night. The Jays had the 12th overall pick and surprised many by passing up on some big arms and taking a high school Jordan Groshan, a high school 3B/SS that was projected by many to be taken in the mid to late 30s. I do not know much about this young chap but a lot of scouts appear to think he has high upside with one comparing him to a very young Donaldson.


#BlueJays are going way off the board at No.12 despite falling pitching talent to take high-school 3B Jordan Groshans. He is ranked 38th by @BaseballAmerica and 31st by @MLB.
— Keegan Matheson (@KeeganMatheson) June 5, 2018


In the 2nd round, 52nd overall, the Jays added to their young "bloodline" core taking Duke outfielder Griffin Conine, son of 17 year MLBer Jeff Conine. The more I read about this second pick, the more I like it. Griffin was picked around where he was projected to go yesterday, but last year was projected to be a top 10 pick! A down season last year dropped his stock significantly, but if it was just a bloop rather than a trend and he can work on the holes in his swing, the Jays may have gotten great value here. That and the Jays are one step closer to fielding an entire team of "MLB sons" in 2022. He also hit 3 HR last night for Duke, so that bodes well.

Today many more rounds of drafting continued. I will not go into them all as there are a bajillian rounds, but the Jays selected high school RHP Adam Kloffenstein with their 3rd pick (88th overall). What is interesting about this pick is that Kloffenstein went to the same HS as the Jay 1st round pick Groshans and it looks like they have a signing agreement in place for both of them to be well compensated. You can read more about the potential signing structure in this JaysNation article.  But alas, as these players are likely years a way, lets take a look at some news regarding players farther along in the process.

The Fisher Cats haven’t had a Player of the Month since our very first season (2004). Who stopped the drought? It had to be Vlad.

Congratulations Vladimir Guerrero Jr., the @EasternLeague's May Player of the Month!

Cavan Biggio could make his @MLB debut this year, at the rate he’s progressing. He’s 23 years old with a 1.059 OPS for the @FisherCats, the most closely watched minor league baseball team in the world. @NotreDame @FightingIrish @MLBNetwork
— Jon Morosi (@jonmorosi) June 5, 2018


Lineups! (I apologize for the garbage Yankee Didi-gif-tweet) 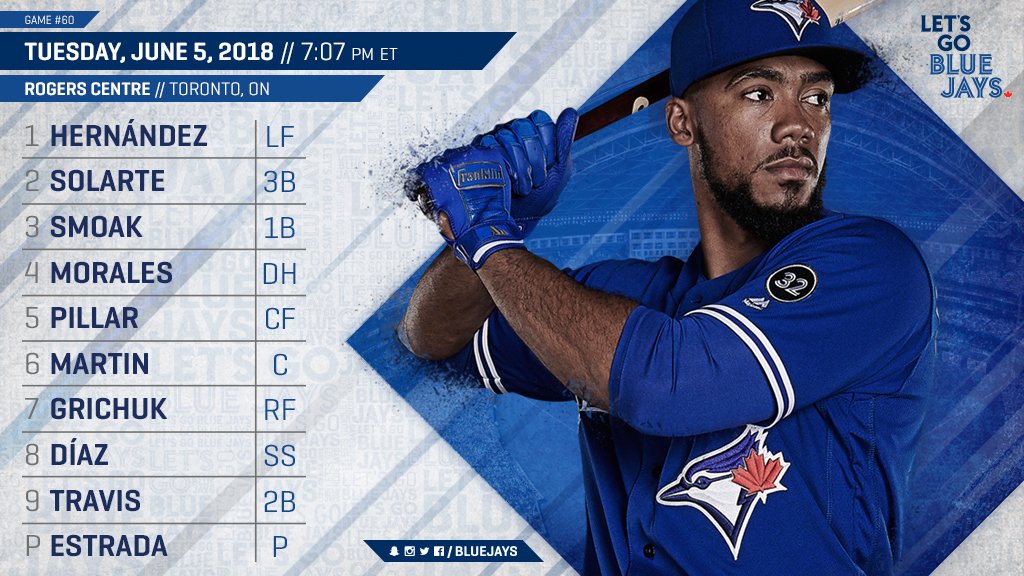 And finally, after much fuss by the MLB's favorite team the Yankees, Sunday's game has no returned to its original 1pm start time! Now I prefer my Sunday drinking to occur in the morning to mid afternoon so this works well for me, although I still find the whole situation funny.


This is your game thread "We're going streaking!" edition.