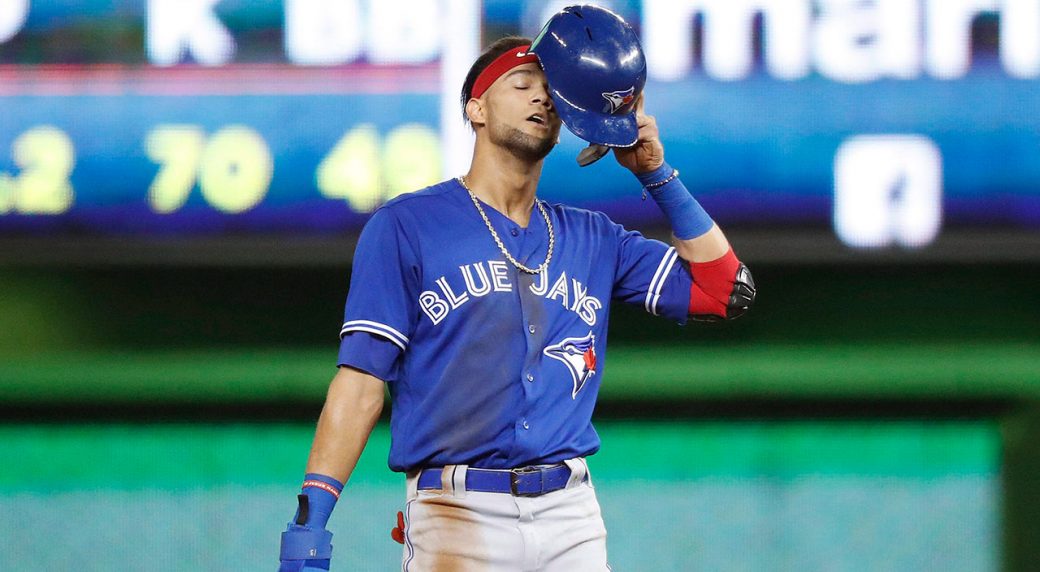 This week has seen a nasty flu bug ravage the Blue Jays clubhouse, a sweep in the proverbial house of horrors that is Tropicana Field, and just overall bad baseball. The week started off with news that reliever Ryan Tepera would miss the next 6 weeks after surgery to relieve the ulnar nerve impingement (more on that later). The Blue Jays continued interleague play over the weekend with a three game series against the Colorado Rockies, who have a collection of good young players that are rounding into form now. In the week ahead, the Blue Jays face the hated Bronx bombers for the first time this season. The Yankees lead the AL East division, despite being ravaged by injuries, including to Tulo (big surpise there, NOT). Former Blue Jay JA Happ is in his first full season in pinstripes. He is off to a 5-3 start with a 4.83ERA. Happ is likely to pitch in Wednesday or Thursday, his first start back in Toronto following the July 26th trade last year. The Blue Jays will also have to face James Paxton, who threw a no-hitter his last start in Toronto, another ex-Blue Jay who has been tearing it up is Gio Urshela (batting .338 with a trio of home runs and 21RBI). No doubt he'll be motivated to do some damage against his former team. The Blue Jays cap of the week and homestand with a weekend series against the Arizona Diamondbacks, who are 4th in the NL West. Like the Blue Jays, the Diamondbacks are in the process of rebuilding and getting younger. It should be an interesting series. Here are ten random thoughts from week 9 of the MLB.

1. The biggest issue this week was a nasty flu bug that ravaged the Blue Jays clubhouse. Cavan Biggio was forced to miss a game in Tampa Bay. Aaron Sanchez pitched through it, although he left the game for an entirely different reason, which I'll get into next point. The flu bug may have also been a factor in supposedly lackadaisical effort on the base paths and in the field. If players, such as Ravatl Grichuk and Rowdy Tellez were playing sick, they may not have had the energy to hustle running the bases or going after fly balls. Now, if the lack of effort continues into next week or the week after, then a case can be made that perhaps players aren't putting the effort in that they should be. Yangervis Solarte was let go after last season due to not hustling running the bases. Management won't hesitate to get rid of other players that aren't putting the effort in. But, let's give the team the benefit of the doubt this week that they were still recovering from the flu.

2. As mentioned above, while Sanchez may have been suffering from the flu, it is not why he left his start after 3 innings and 64 pitches. For the second time in three starts, Sanchez developed an issue with his finger, this time an avulsion that caused the nail to break away from the skin and a blood blister formed. Evidently it occurred on a fastball in the 1st inning. Why was Sanchez allowed to pitch two more innings with the injury. Did he not tell trainer Nikki Huffman right away when he got back in the dugout between innings? By refusing to go on the DL, Sanchez is hurting both the team and himself. After this week, the Blue Jays have another stretch of 15 days between off days. They can't afford to have Sanchez only be able to throw the first three or four innings. It's time for Sanchez to swallow his pride and accept the IL stint. It's time for the team to consider moving Sanchez to the bullpen.

3. One pitcher who is being smart about his injury is Ryan Tepera. The Blue Jays righty had surgery this week to relieve an ulnar nerve impingement. Sure Tepera is going to miss 6 weeks and not be available until after the all-star break, but at least he'll have a good chunk of the season remaining when he does return. Also, Tepera is a 1-2 inning reliever, so he won't need much of a rehab assignment before being ready to return.. Tepera is 0-2 with a 6.55 ERA in 12 appearances (11IP) this season.

4. How about some good news on the injury front? Ryan Borucki took a step towards starting a rehab assignment with a 20 pitch bullpen this week. The 25 year old lefty has yet to pitch this season due to soreness in his pitching elbow. He'll need at least a couple of more bullpens before the team sends him on a rehab assignment. Given the desperate need for reliable starters, the Blue Jays may do what they did with Clayton Richard and give Borucki one start in the minors and then let him build up the pitch count in the majors.

5. It sure pays to have a hall of famer for a dad and who played his first eight years in the National league. The younger protege, Vlad Jr. took dad's sage advice and turned it into a 3-4 night in his first career game at Coors field, finishing a triple shy of the cycle. The next night, Guerrero Jr. smashed a double down the right field line and Rockies first baseman Daniel Murphy didn't even move. Dad better watch out because his son will likely pass him on the all-time list sometime in the next decade.

6. There are a couple of big name free agents in Dallas Keuchel and Craig Kimbrel, who have yet to sign on with a team, likely because both received qualifying offers that they refused from their former teams. Once the deadline passes and teams are no longer penalized a draft pick for signing them Monday, both are expected to sign with a team. Don't be surprised if Kimbrel returns to the Braves and my bet is Keuchel ends up in pinstripes playing for the Yankees. Both have world series championships so winning may not be the biggest factor in picking a team.

7. The same article mentions that the Blue Jays should start thinking of trading Stroman and Sanchez. I can see Stroman getting a solid return. Teams will certainly take into account his lack of run support. I think the team should hold off a bit on Sanchez to get the finger issues sorted out because there won't be many teams that would risk the trade for Sanchez now knowing he could miss a start or twenty with recurring blisters.

8. Justin Verlander surpassed Cy Young for 21st on the all-time strikeout list. After Saturday's game, Verlander now has 2809 strikeouts, 2nd on the active player list behind CC Sabathia. Verlander has sole possession of 21st place on the all-time list, 4 strikeouts behind Mike Mussina. Nolan Ryan leads all-time with 5714 strikeouts, a number that will almost certainly never be beaten, especially with the emphasis on pitch counts.

9. Finally, here are ten story lines to keep an eye on as the draft gets underway tomorrow. Let's hope the Blue Jays choose wisely.

10. Blue Jay of the week: Lourdes Gurriel Jr. who had his hitting streak snapped Sunday, but was easily the most consistent Blue Jay this week. Ken Giles does not qualify IMO due to only pitching 1 inning.