The Blue Jays look to avoid getting bludgeoned for the third time in the series by the Best Player of All-Time and not be swept in the finale of a four-game series.

It's Clayton Richard's turn to get fed to Mr. Trout tonight on the mound.  His counterpart, Jose Suarez, gets to feel what it's like to be Cy Young for one night.

Ken Giles has been activated from the injury list in time to reclaim his customary seat on the bullpen's bench where he'll mostly just get paid to sit there and watch the other pitchers get massacred.  Justin Shafer has been mercifully extracted and sent to the warm, cozy confines of Buffalo.

Potentially big news for Canadian baseball fans:  The Tampa Bay Rays have been given permission to explore the possibility of splitting their home games between Tampa (for early-season games) and Montreal (for the rest of the season).  It's not a full return to Montreal, if this were to happen, but it's one step in the right direction to getting a team back in Quebec.  T (Tim) wins the previous thread with a comment, "If they don't change their name to the Ex-Rays, they're dead to me."

Name any (or all) of the three Canadians who appeared in a game for both the Blue Jays and the Expos. 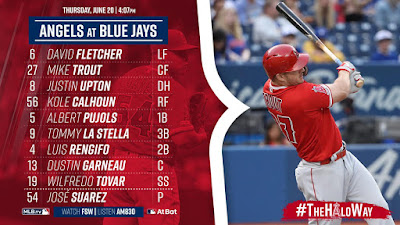 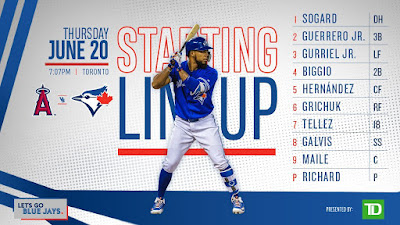