After an almost-predictable shellacking of Edwin Jackson, now the proud owner of the all-time worst visiting pitcher ERA of 14.67 in Colorado, the Blue Jays look to bounce back in the second game of a three-game series against the Rockies.

Marcus Stroman looks to continue his string of good starts (three in a row with one run given up) as he takes the ball for the Blue Jays tonight.  He'll face Jon Gray, who has had his ups and downs over the last while.

Reminder - this will be my last game thread for a week, so please consider signing up to do a few threads so MK doesn't have to do it all herself.

Don't forget to stay tuned for Stroman's at-bats tonight - dude can hit.  Probably better than everyone in the lineup, save for Vlad.  He's also 10-3, 2.51 for his career in interleague play.

If you missed it, here is Vlad's HR from last night:

Trivia:  This Blue Jays pitcher earned his first major league win in 1982, and had kept the ball from this game.  A decade-and-half later, he realized as Cal Ripken Jr. neared the consecutive-games played record that the date of Ripken's streak started with his victory over Baltimore on that date.  He contacted the Orioles to donate the ball and presented it to Ripken during a post-game ceremony.  Who was this Blue Jays pitcher? 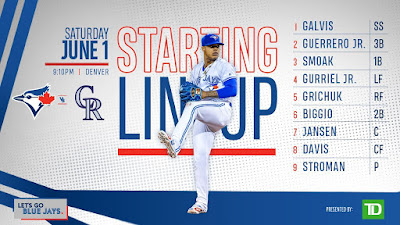