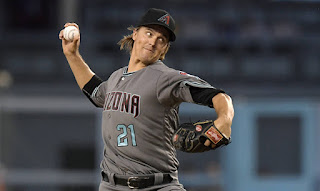 
After getting spanked 8-2 by the Diamondbacks last night, the Blue Jays were trying to even the series and guarantee a split in the homestand this week. Aaron Sanchez was on the mound and who knows how many innings he's going to last in a given start with his fingers. Cavan Biggio led off today and was back at his ideal second base position. The Blue Jays batters were in tough with Zack Greinke pitchng. Could the Blue Jays pull off a miracle? Here is today's game recap.