Near-last place Blue Jays are in Houston to face the first-place Astros for a series.  What could go wrong, right?  Prepare for some blood-letting.

Aaron Sanchez takes the ball tonight for the Jays as he brings a career 3-1, 3.66 record against the Astros while opposing Gerrit Cole, who has only faced the Jays once in his career (in 2014 while with Pittsburgh).

The Astros will be without Jose Altuve, Carlos Correia, Aledmys Diaz, George Springer or Max Stassi for the series, so maybe the Jays do have a very small chance of not getting embarrassed this weekend.  We'll see!

Should be a fun weekend for Cavan Biggio.  He was born and raised in Houston and spent much of his youth roaming around the ballpark while his dad was there.

Yay, Raptors.  Now all the focus is on the Jays now that the Raps are focused on planning their parade and the Leafs are planning their next tee-off times.

David Phelps is apparently in town with the Jays, but will likely get a couple of days rest before a decision is made whether to activate him.   He'll really boost the bullpen if he's feeling right.

Nick Kingham is also getting a couple days off before reporting to the Jays.  It sounds like he'll be in the bullpen as the long guy at first, maybe to work himself into game shape before going into the rotation.

Gibby sighting!  Hopefully he's passing along some useful advice that he gained from his experience during his first go-around as a Jay and then appearing a lot more relaxed his second time....


Trivia and Jay of the Day - on hold due to time constraints.  Yeah I know... DFA. 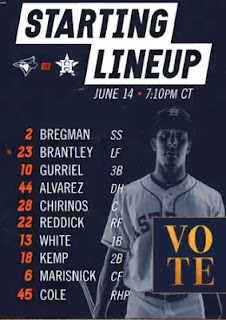 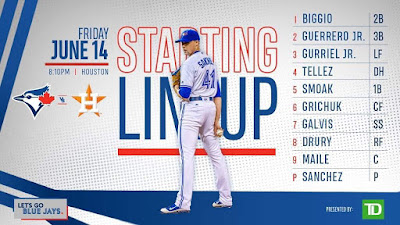