Well, that was a real ball-breaker last night.  Two triples that wouldn't have happened pretty much anywhere else conspired to ruin Trent Thornton's excellent outing.  This afternoon, the Blue Jays look to get a lead again and actually hold it this time without any ballpark shenanigans.

Today, we've got an opener, Derek Law, and he'll be followed by Sam Gaviglio in what will be a bullpen day.  They'll take on Brian Johnson, who was beaten up a little by the Jays last year in going 1-1, 8.49 ERA in four appearances (2 starts).  Gaviglio has been respectful enough against the Red Sox in his career, going 1-2, 4.79 in seven appearances (3 starts).

What more can you say about Trent Thornton?  He seems to be getting more and more comfortable in the big leagues and is outperforming expectations thus far.  His last two starts were against very tough offensive teams (HOU, BOS) and he effectively shut them down (13 innings, 2 runs, 14 K, 4 BB).  He deserved a better fate in last night's game, but a dinky-dink bounce off that weird center-field wall corner ended his night and cued a Red Sox comeback.  Don't look, but he's now second on the Blue Jays in bWAR with 1.7, only behind Stroman's 2.0 (faint praise, I know, but... let me have this one).

Some Useless Info from Jayson Stark: 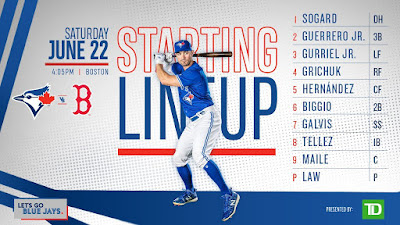 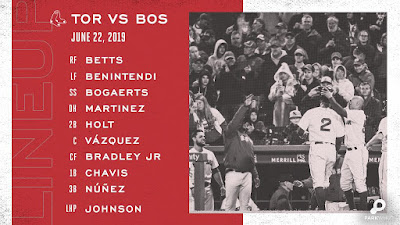 This is your "you know how to take a reservation lead, but not how to hold one" game threat.
Posted by macgyver13 at 3:00:00 PM