After winning game three of the series last night, the Blue Jays look to secure a series win and regain some pride after taking a beating from the Rays most of the season.  They've got a tough matchup on the mound, though, as they'll be facing the hottest pitcher in all of baseball who has both the wins/ERA (outdated stat models) and the WHIP/ERA+ (newfangled stat models) that makes you sit up and take notice.

Facing Cy Young, it's Ryan Borucki that takes the ball for the Jays as he looks to continue a better-than-expected rookie campaign and audition for a permanent role in the 2019 rotation.

The real playoffs has gone right down to the wire.  I refer, of course, to the JITH fantasy league where Player To Be Named Later and Mule or ... Astro-mule? are deadlocked at 7-7 going into the final day of the season.  Post your pick who you think will win between PTBNL and Mule!  (Tough decision, but I'm going to say... Mule)

A good article from Jeff Blair of Sportsnet on Russell Martin and his breakdown of this season and outlook for next year: What Blue Jays can expect from Russell Martin's final year

I like to think that we won the Osuna trade in a big way - not just the removal of a potential clubhouse headache, but we also got a bona fide closer in Ken Giles as well as potentially useful pieces in David Paulino and Hector Perez.  There's this:

24 save opportunities.
24 saves converted.
The best part? A 0.40 ERA in save situations. 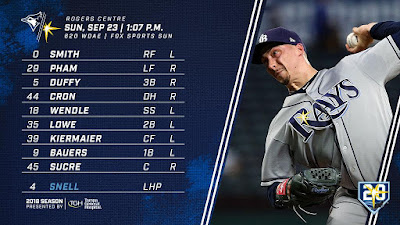 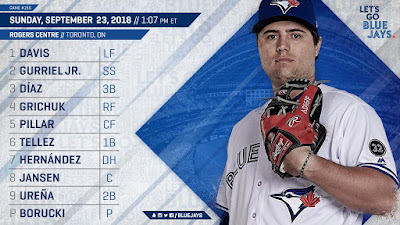