The Rays continue to make themselves very much at home in the Jays' sandbox, kicking sand all over the Blue Jays.  The final amount of sand being dumped on our boys continues tonight in the finale of a three-game mauling.  The lack of fans attending the first two games of this series only serves to further the home-field advantage for the Rays here since they're well-used to playing in front of a mere 700 or so people.

Aaron Sanchez tries to salvage what's left of this miserable season for him as he goes up against Tyler Glasnow.

The Rays are going for a record tonight - they have held the Jays to five or fewer hits in seven consecutive games, which ties a record set by the '68-'69 Orioles against the Washington Senators.

Joe Biagini has been placed on the DL (left oblique strain covering up his right-arm shittiness) and Jake Petricka takes his spot on the roster.  David Paulino has also been activated from the minor league DL.

The Jays sucks, so let's go to the mailbag - namely, a few links put out there by our mostly fantastic group of posters in the previous thread; bringing them over here to ensure they're not being missed by the evening crowd of posters.

Stoeten posted a rather good and well-reasoned article on the factors behind Josh Donaldson's departure from the Jays.  It's from the Athletic so hopefully you have a subscription to read the whole thing.  Article here.

A couple of John Lott tidbits:


"I didn’t know that I had that many people in my corner.” Facing a tragic loss, Rowdy Tellez sheds his bitter shell and finds supporters at every turn. My story: https://t.co/Nu6b0HtwM7 #BlueJays pic.twitter.com/vZAiMQt454
— John Lott (@LottOnBaseball) September 5, 2018

Top #BlueJays pitching prospect Nate Pearson hit 102 mph in Tuesday exhibition between Lansing & Michigan State. He worked 2 IP, hit 1st man he faced, got 2 FCs then struck out 4 in a row. First action since only regular season start May 7 when a line drive broke his forearm.
— John Lott (@LottOnBaseball) September 5, 2018


Gotta love Gibby - this is a beaut of a quote regarding the September call-ups:  "Just watch the games ... and basically enjoy it," Gibbons said he would advise the young players. "Don't expect to take a ton of (batting practice) because we're killing our coaches anyway. Don't overdo it. Just enjoy the experience, take advantage of it, watch and learn. They'll all go to some nice stadiums, they'll see all the primary places we play. Don't eat too much of the food. You laugh, but it happens a lot. They swell. They swell up, you know."  He'll be missed in the clubhouse after he gets his walking papers at the end of the season.


Been a few days... but just wanted to thank the @Brewers for believing in me and drafting me 3 years ago. I appreciate everything they’ve done for me over that time. Excited for this great opportunity! Ready to get to work with the @BlueJays ..coming home ‼️🇨🇦 thank God https://t.co/EH7aGtT6xk
— Demi Orimoloye (@DemiOrimoloye16) September 5, 2018


Oh, and we've got Roberto Osuna news.  Well, not much, really... His case has been put over to Sept. 19th.  "Discussions are still ongoing," sez his lawyer. 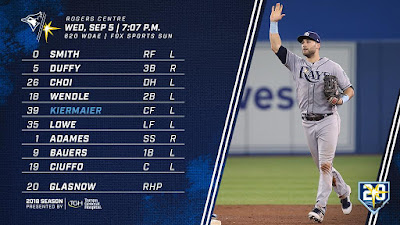 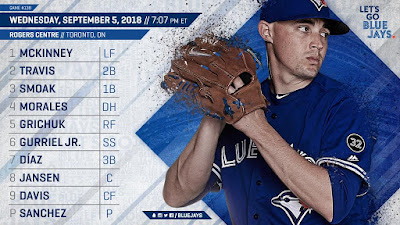 This is your "roll over and play dead" game thread.