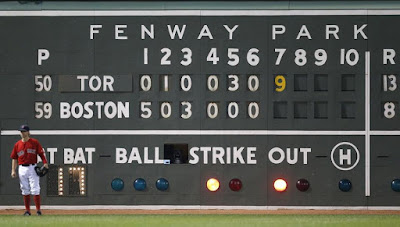 Phase 2 of the Beantown Beatdown is complete and the Red Sox are going for a sweep in tonight's game against the Blue Jays.

Sammy G takes the mound ... there ought to be a mercy rule for starters who have had their asses kicked all over the diamond for 2+ months now.  Tonight should probably go according to form. *sigh*   There's a slight sliver of hope - remember when Dustin Pedroia got attacked by a swarm of Blue Jays in 2015?  That was during an Eduardo Rodriguez start, the guy who's on the mound tonight for the Red Sox.

Hard to believe but yesterday's 100th win for the Red Sox was the first time they've reached 100 in over seven decades.  The Yankees have done it 12 times and the Cardinals 7 times since the Red Sox last did it.

Conga-rats to Jonathan Davis for his first MLB hit in last night's game.

With it being the final game of the season between the Jays and the Red Sux, why don't we play a little revisionist history dating back to 2003?  I refer, of course, to the Grady Little decision to leave a gassed-fifteen-different-ways Pedro Martinez in the 8th to throw umpteen pitches past his best-before expiry date in Game 7 of the 2003 ALCS.

Yes, I blame Grady Little for the three World Series titles won by the Red Sox since then, and just as importantly, for the birth of the vile Red Sox Nation.

Let's go down memory lane, shall we?

It's Game 7 of the 2003 ALCS and the Yankees were still in their dynasty days, having reached the World Series in five of the previous seven seasons (and would do so again in this season).  Pedro was Pedro for the first six innings before he started to wobble in the 7th.  Everybody thought he'd be done as he was at 100 pitches through 7 complete -- the book on him among the budding baseball nerd universe was that he was Cy Young up to 99 pitches and then basically 2018 Joe Biagini after 100 pitches.

But, no!  Pedro is out there on the mound for the 8th with a 5-2 lead.  Predictably, he started to get cuffed around and Grady went out there to the mound after three of the first four hitters got on base.  Pedro's getting pulled after 115 or so pitches, right?  Nope.  He was allowed to face Jorge Posada who had hit righties very well all season long.  Yup.  A game-tying double.  And then in extras, Aaron Boone ended it with a walk-off to send the Yankees to the World Series.

So now, for some revisionist history.  What if Grady Little had done the common sense thing (no, Wince, don't answer) and taken Pedro out after 7 complete innings?  The Red Sox probably would have gone on and be chewed up by the Diamondbacks in the Series and then headed back into typical Bostonian up-and-down mediocrity to this day.

What if Pedro Martinez hadn't expended so much energy with the Olé, Olé, Olé manoeuvre with a hard-charging Gerbil earlier in the series during a brouhaha where Clemens and Manny exchanged Halloween greetings to each other?  Could he then have gone another inning and put an exclamation point on Game 7?

Would Grady Little have remained manager for the fateful 2004 season if he hadn't left Pedro out there for too long and the team made it to the 2003 Series and lost to the D-Backs?  He would have remained on the job as the Red Sox became mediocre again and Tito Francona would have gone elsewhere in search of a job opportunity.  The 2007 championship wouldn't have happened in this scenario, either.

Don't get me started on the rabbit foot Lanternjaw McFuckface, Esq., had up his ass in 2013 where he was hired to essentially stay out of the way and watch as the Sox took the championship that season -- but who's to say that McFuckface, Esq., would ever have been given the opportunity with Tito managing somewhere else in 2004?  Ergo, no 2013 championship for the Sox in this revisionist history exercise.

And would Aaron Boone have even been considered for the managing job of the current Yankees team if he wasn't anointed for sainthood in Yankee lore after Grady didn't let the bullpen save the game for Pedro?

So... tl:dr for some of you, but I blame Grady Little for the past fourteen seasons and it's why Red Sox nation is filled with rotten, egoistical wretches. 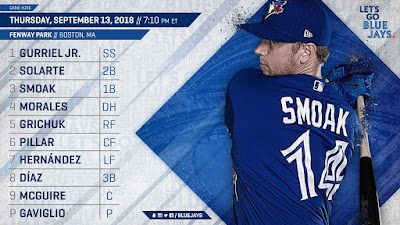 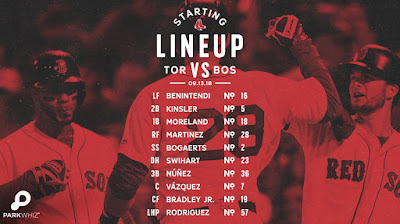