Game one of the scheduled September Beantown Beatdown went, naturally, the Red Sox's way after we were teased for almost seven innings by a great start from Ryan Borucki.

Tonight, the man who rallied the players together during the fabled 2015 stretch drive with his gift of bathrobes to each teammate, David Price, takes the mound to face Aaron Sanchez who is coming off a nice outing against the Rays.

Price is merely 20-3, 2.52 lifetime against the Jays.  How soon can Vlad Jr. get here?  He seems like the type who would eat lefthanders for lunch.

Congrats to Russ Martin - he has been placed on the paternity list.

For some reason, this is 'trending' (in the view of the Jays):

A certain superhero is trending today.


Some stuff from around baseball, cobbled from online or on the other thread from our good folks:


And this is a brutal way to lose a championship:

Ever seen a walk-off balk to win a @MiLB championship? 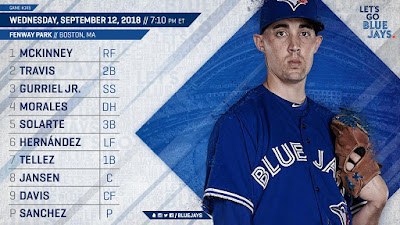 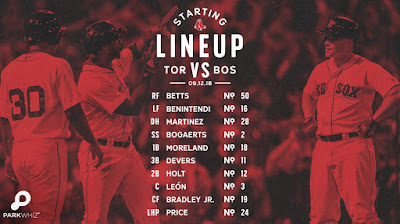