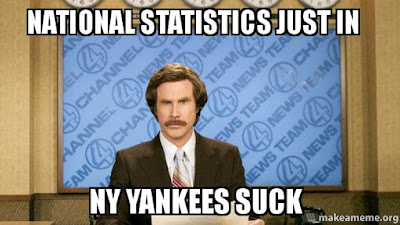 The Blue Jays, licking their wounds after being swept by the Red Sox, fly to New York for a series against the slumping Yankees, who have just returned from a 9-game road trip on the other coast.  The Yankees are just a game-and-half ahead of the Athletics for the right to host the wild card game.  Can the Jays play spoiler and force the Yankees to fly all the way to Oakland for a 1-game, winner-take-all matchup?

Marco Estrada looks to build upon his solid outing last time against the Clevelands, while the Yankees counter with Masahiro Tanaka, whose arm apparently is no longer hanging by a slight thread.

Aaron Judge has been reinstated off the DL, though he's not in the lineup tonight.  Quick - take advantage by drilling balls to RF without him there to swat down the ball in front of the fence!  It's being reported that he can run the bases and play D, but won't be used as a hitter just yet.  It'll be useful to have him around if there's a bench-clearing brawl, I guess.

Not much else to report on for now - the Jays stink, so let's put some wins together and we'll get some good content to discuss.

Jayson Stark looks into the conundrum over service time manipulation that keeps Vlad Guerrero Jr. down on the farm instead of terrorizing pitchers up here, as he should be doing, and Stark offers up some ideas to improve the system.  Thanks to Smasher for posting it on the other thread, the link is here:  Is there a way to fix baseball's service time mess? 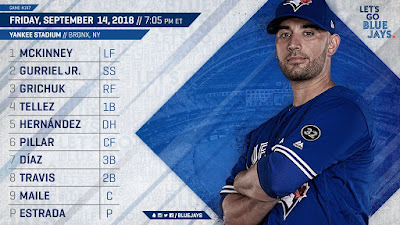 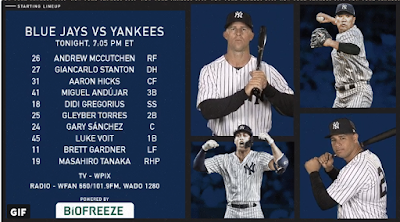