After a series split against the Tampa Bay Rays, the Blue Jays welcome the defending World Series champions Astros to Toronto for a three-game series.

On the mound, Marco Estrada takes the ball as he attempts to stave off Father Time stealing what's left of his "fastball".  Dallas Keuchel is his counterpart in tonight's matchup.

There's all kinds of story lines going on in this series.  We've got:


No shame in losing a pitcher's duel to Blake Snell, too bad that Ryan Borucki couldn't get some support in yesterday's game.  Here's an interesting fact:

#BlueJays to allow 3 hits or fewer in 4 straight starts: 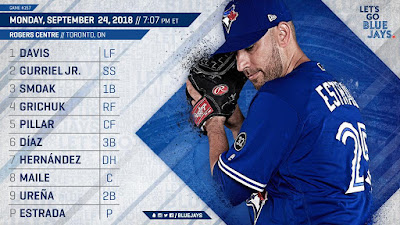 This is your "grab a bucket of popcorn and a six-pack, gonna be fun" game thread.