After a virtuoso performance from Ryan Borucki in a 5-0 win in the opener, the Blue Jays look to carry on the momentum into game 2 of the series.

Aaron Sanchez looks to continue his solid September and end the season on a good note as he takes the ball on the mound tonight.  His opponent, Dylan Bundy, has given up a major league-leading 38 HRs so far this season.  Om nom nom.

I know I made a joke about this in last night's game thread, but this is a nice way to show recognition to the National Federation of the Blind:


I like symmetry as much as the next guy, but this is one I can live without (and I wouldn't call 3-9 to be "highly unlikely" considering the remaining opponents).  Thanks to Smasher for bringing it over on the other thread:

A stat I find fun/interesting: in John Gibbons’ first run as #BlueJays manager, he finished with a 305-305 managerial record. If the Jays go 3-9 the rest of this season (highly unlikely), he’ll finish his second run as Jays manager with a 491-491 managerial record
— Blue Jays Memes (@Bluejaysmemes) September 18, 2018 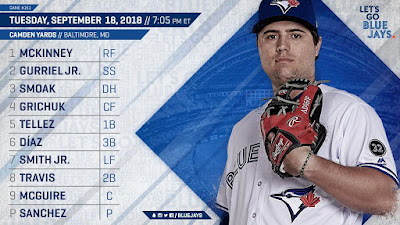 This is your "Keep the LOLs coming" game thread.