Well, this is it.  The final series of the 2019 season for the Blue Jays.  In this series, they face a Rays squad that is fighting to lock up a post-season berth -- currently, the Rays are set in the second wild-card spot, a game behind Oakland and two up on Cleveland.  Win tonight and the Rays are in.  Let's see if the Jays can make life miserable for the Rays.

T.J. Zeuch makes his third major-league start on the hill for the Jays.  His counterpart, Tyler Glasnow, is making his fourth start back from a long stay on the I.L., having gone a total of 8 innings with a 2.25 ERA in his three starts back.  Glasnow is 0-2, 7.58 in five career starts against the Blue Jays.  Zeuch is facing the Rays for the first time.

Conga-rats to Rowdy on becoming the fourth Jays rookie to hit 20 HRs, with the others being Fred McGriff, Eric Hinske and J.P. Arencibia.  Coming into this season, bet you were thinking of someone else (*coughVladcough*) as the more likely candidate to become the fourth, not Rowdy.

Now, if only Rowdy could add other skills beside hitting HRs to his repertoire. The two HRs last game pushed his bWAR all the way up to... 0.0 for the season.

Yennsy Diaz and Ryan Dull are up with the team for the final series.  Lourdes has been moved to the 60-day IL to create room (no worries - he'll be back on the roster in the off-season).

Eric Sogard is still out with a bone bruise on his foot and does not seem likely to play against the Jays in this series.

So, the Rays are battling for a playoff spot, eh?  Here's a visual representation of the fight between the A's, the Clevelands and the Rays:

We are Beyoncé, always. 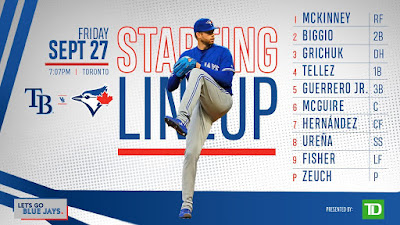 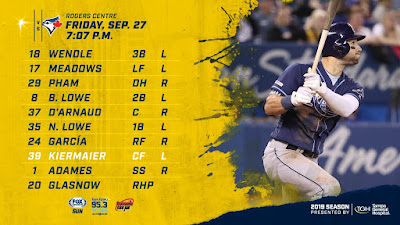