After yesterday's marathon extra-innings thriller that had a little bit of everything from a Bo Bichette walk-off to a devastating injury to Tim Mayza, the Blue Jays look to take advantage of an overworked Yankees pitching staff (doubleheader on Thursday, extra innings on Friday, losing Happ to injury) and aim for a series win in this afternoon's second game.

Jacob Waguespack takes the ball for the Jays as he looks to bounce back from a rough outing against the Rays his last time out.  James Paxton is his counterpart on the mound for the Yankees; even with his no-hitter last year, Paxton is 3-3, 5.44 in eight starts against the Blue Jays for his career.

It's official, Mayza is out for the rest of this year and also likely all of 2020:

“It’s the saddest thing, especially the guy it is. Everybody loves Timmy. The whole team went to check on in after the game, Font even went in to check on him between his innings.” #Bluejays
— Mike Wilner (@Wilnerness590) September 14, 2019


Other roster changes:  Lourdes Gurriel Jr. and Luke Maile have been activated off the injury list.

#BlueJays manager Charlie Montoyo on Bo Bichette, who kind of called his shot:

“This kid’s going to be a star. He’s confident. Before the at-bat, he told a guy on the bench, ‘If they leave the left-hander on the mound and he throws me a slider, I’m going to take him deep.’”
— Keegan Matheson (@KeeganMatheson) September 14, 2019


Alek Manoah is up visiting with the Jays this weekend:

As for his first impressions of big-league life: "They eat really good. The kitchen's amazing."
— Ben Nicholson-Smith (@bnicholsonsmith) September 13, 2019


In case you missed Billy McKinney's hot-shot that almost took off LeMahieu's head and ended up being a very unlucky DP last night: 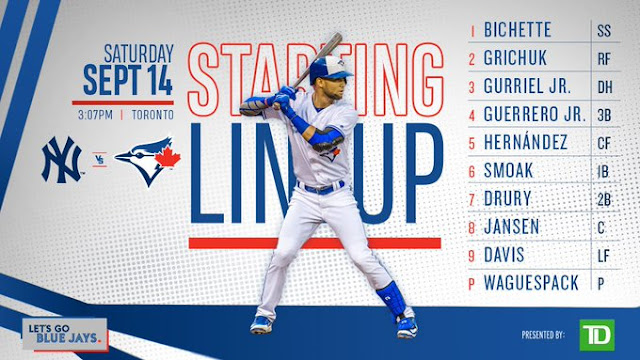 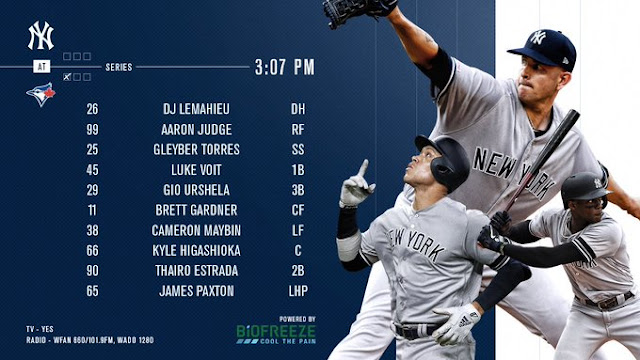