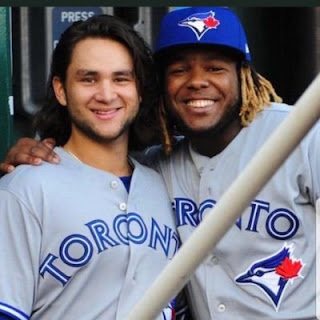 Only 17 games left to get through this season, folks, then it's back to our favourite sport: speculating on next year's roster.  At least we're being entertained watching the Red Sox's season being slowly flushed into the toilet as Alex Cora has admitted they're basically out of it by now (9 games behind Oakland with 17 to go) so he's planning to rest his big stars one-by-one so they don't get worn down on the turf in Toronto -- who knew that having turf would turn out to be beneficial!  Bogaerts was rested last night, tonight is Mookie's turn and then tomorrow is Devers.

Tonight on the bump is an epic match-up of openers with Wilmer Font (Jays) and Bobby Poyner (Red Sox) getting things started off.  Poyner has faced the Jays twice, both last year, for a total of one inning with one run given up.

Reese Can Rake 💪@Reese_McGuire21 is hitting .339 with 5 homers since the start of August!@BudweiserCanada https://t.co/m5z9mQVvEu pic.twitter.com/UsaIo41OmC
— Toronto Blue Jays (@BlueJays) September 11, 2019


You may be wondering why I called this matchup the Dombrowskis vs. Shapiros up there in the game threat.  Over on the Athletic ($), Stoeten takes a look at what if Rogers had hired Dave Dombrowski instead of Mark Shapiro back in 2015 when both were available at the same time.  As it turned out, the Red Sox picked up Dombrowski a couple of weeks before Shapiro was hired by the Blue Jays.
Article here:  What if... 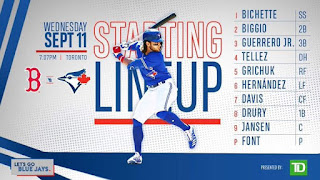 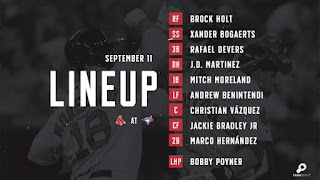