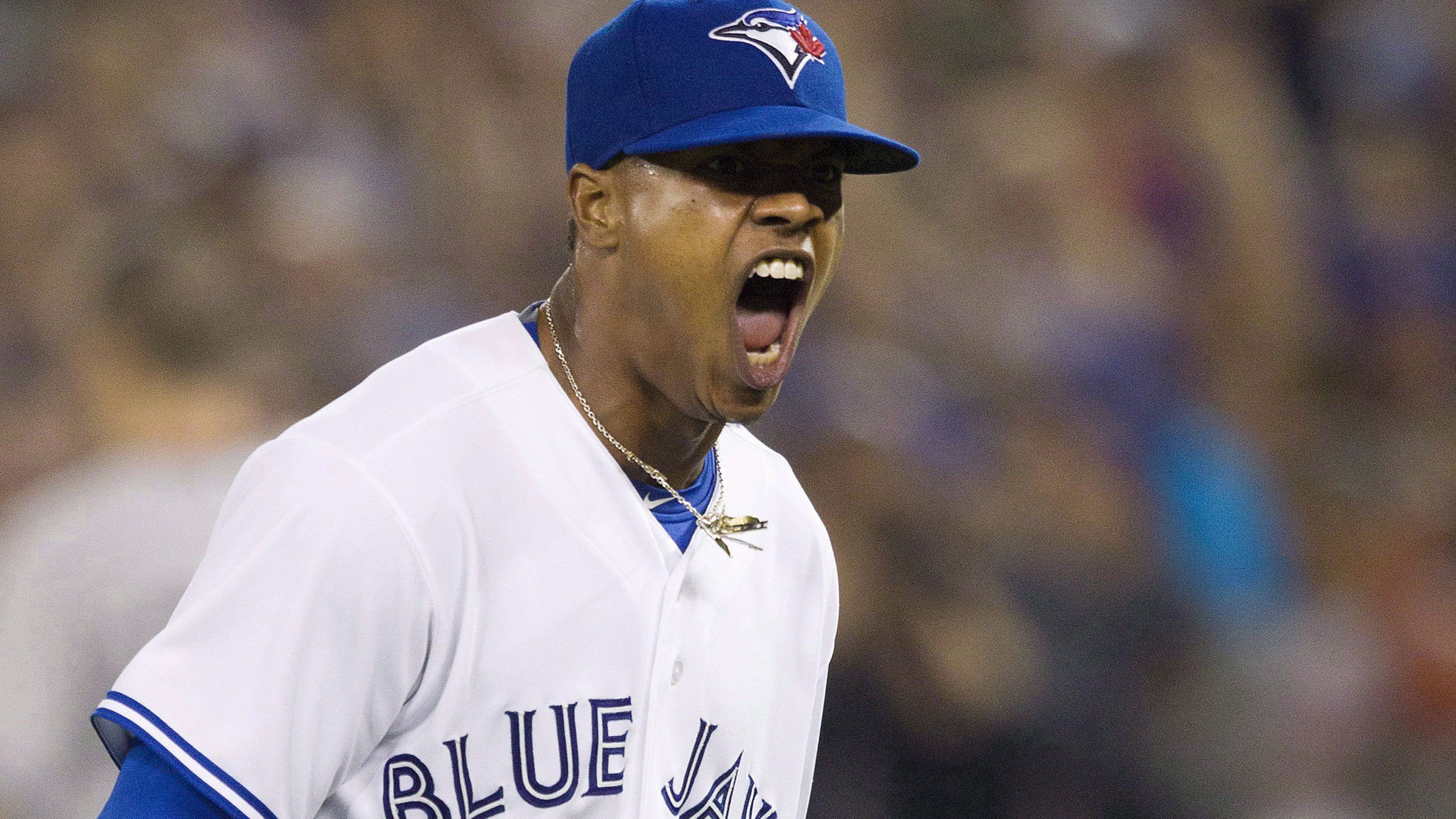 It was an emotional week this week with Marcus Stroman making what in all likelihood is his final start in a Blue Jays uniform (more on that later). Trevor Bauer and Shane Bieber also threw gems against the Blue Jays. The Blue Jays staged an impressive comeback against the Rays Saturday, after being stymied by a bevy of relievers Friday. Ryan Borucki made his season debut and had one decent start and one lousy start (more on that later). Trent Thronton landed on the 10 day IL with inflammation in his pitching elbow. Prior to Saturday's start, Luke Maile pulled his oblique muscle, leaving the Blue Jays with one catcher (more on that later). Friday also began a stretch of 20 days between off-days, the longest stretch of games of the season. Looking at the week ahead, the Blue Jays embark on a 3 city 10 day road trip beginning in Kansas City Monday (today). Marcus Stroman was scheduled to pitch the second game of the series. On Thursday, the Blue Jays begin a four game series against the Baltimore Orioles. Both teams rosters/lineups could look decidedly different. Here are ten random thoughts from week 17 of the MLB.

1. Let's start with the good news of the week. Ryan Borucki made his long awaited seasion debut Monday after missing the first three months with an elbow injury.. On Monday, he battled through 4.2 innings against an Indians team that's battling for a wild card spot. He allowed 4 runs (2 earned) on 7 hits while walking 4 and striking out 3. It's not surprising the command was off given the amount of time Borucki missed. On Saturday, Borucki got the start against the TB Rays, another team fighting for a wild card spot. Borucki was off right from the get go. After getting the first batter he faced out, the Rays loaded the bases with 2 singles and a walk. Borucki escaped the jam with a double play. The next inning, he didn't get so lucky, giving up a pair of no-doubter 3-run HR. Many of the pitches Borucki threw were in the middle of the plate. Hopefully next start goes better.

2. On the same day Borucki came off the IL, Trent Thornton was placed on the 10 day list with elbow inflammation. The elbow problems have been a troubling trend this season to say the least. No fewer than 5 pitchers (Borucki, Thornton, Ryan Tepera, John Axford, and Elvis Luciano). Thornton's injury comes at a suboptimal time with Stroman heading to the Big Apple.The Blue Jays rookie righty had been having an up and down season with a 3-7 record and a 5.45ERA in 21 starts this season. Here's hoping the injury is relatively minor and he can be back pitching in a couple of weeks.

3. On Saturday, the Blue Jays were left in a slightly uncomfortable position when Luke Maile went down with a strained oblique during batting practice ahead of the matinee. It left Danny Jansen as the only healthy catcher for the game. In the event something happened to Jansen, Eric Sogard, who start in RF Saturday, would have been the emergency catcher. Expect Maile to miss more than the 10 days as he'll likely be shut down completely for at least a week. The veteran catcher was having a tough season, batting .153 in 111AB with 2HR and 9RBI in 41 games this season.

5. In a somewhat expected move, the Blue Jays DFA'd Dalton Pompey, who completed his rehab assignment last weekend. Because he was on the roster prior to being placed on the IL, he had to either be activated, released or DFA'd. By DFA'ing him, the Blue Jays can potentially get something back for him. In all likelihood, Pompey will wind up in Buffalo. Last season, he had 2 his in 10 at-bats. Unfortunately, several players passed the Canadian outfielder on the depth chart. Lourdes Gurriel Jr. has been outstanding LF and his bat has really come alive since he was recalled, with a .280 average, 18HR and 44 RBI on the season. Teoscar Hernandez is still seen as having potential, and he has been hot recently as well, including a huge walk-off HR Saturday. Randal Grichuk is firmly set in CF/RF, especially considering his hefty contract. Billy McKinney is another corner outfield option, who is swinging a hot stick lately. I was kind of hoping Pompey would be given another opportunity, but alas it was not in the cards.

6. Marcus Stroman, who was traded after Sunday's game to the NY Mets in exchange for prospects Anthony Kay and Simeon Woods-Richardson, had an outstanding final start as a Blue Jay. The veteran righty fired 7 innings Wednesday, allowing 1 run on 5 hits while walking 1 and striking out 6. Stroman is 6-11 with a 2.96ERA in 21 starts this season. He finishes his Blue Jays career with a 47-45 record and a solid 3.76ERA in 135 appearance (129 starts). Kay and Woods-Richardson are both likely a couple of seasons away from competing in the majors. Kay, who was drafted in the 1st round (31st overall) by the Mets in the 2016 MLB amateur draft, is 7-3 with a 1.49ERA in 12 starts in AA ball. Expect him to report to New Hampshire to start. Woods-Richardson, who was drafted in the second round of the 2018 MLB amateur draft, was 3-8 with a 4.25ERA in 20 starts in A ball this season.

7. Eric Sogard was also on the move Sunday. Originally, he was in the lineup, but was a late scatch with a deal imminent. He didn't have to venture far to meet his new team, as they were sitting in the opposing dugout. Sogard was a bright spot in a very poor season thus far for the Blue Jays. He was a super utility player, seeing playing time at second base, shortstop, third base and right field. Sogard was also having a career year at the plate, batting .300 with 10HR and 30RBI in 287AB over 73 games. He'll certainly leave a big hole in the lineup and in the field.

8. Now that Sogard and Stroman are gone, there are several other players who will draw interest. Relievers Ken Giles (2-2 with a 1.54ERA and 14 saves in 35 appearances in 2019), Daniel Hudson (6-3, 2.87ERA in 44 appearances this season), and David Phelps (3.63ERA in 17 appearances) will draw interest from teams looking for bullpen help. Shortstop Freddy Galvis is rock solid in the field. He's batting .265 with 15 HR and 48 RBI in 316AB this season. How many, or will all of the above be gone this week?

9. Finally, I want to address the poor umpiring that took place this week. Boston played a game under protest, disputing a batting order call.. On Saturday, two controversial calls went against the Blue Jays. In the top of the 1st, Tommy Pham stole second base, and the call was upheld even though replays appeared to show that Freddy Galvis not only tagged Pham out, but that the Rays LF did not touch the base. In the bottom of the 4th, Galvis smacked a double down the line and Pham clearly deflected the ball into the stands, which should have resulted in 2 runs, giving the lead. Instead, it was a ground rule double and only one run scored. The Blue Jays lost a tight game 3-1. Imagine these calls were made in game seven of the World Series and cost someone a championship.

10. Blue Jay of the week: Marcus Stroman, who else? The righty put on a show in his final start, not only in front of the home crowd, but in a Blue Jays uniform. It's unfortunate he got zero run support, as has been the case so often when he's started. I wish Stroman the best as a Met and hope he dominates.
Posted by opinionator777 at 7:00:00 AM