After an off-day yesterday, the Blue Jays begin a 20-game stretch without off-days with a three-game series against the always-frickin'-annoying Rays.

Jacob Waguespack gets us started tonight with the Blue Jays rotation in a state of flux over the uncertainty over how the trade deadline will impact things.  Diego Castillo will open the game for the Rays before they turn it over to one of those dime-a-dozen guys that always shut down the Jays when inserted into the game.

The trade rumours are heating up into overdrive these days with all kinds of rumours flying about.  Stroman to Yankees?  Twins?  Padres?  Braves?  Astros?  Or will he stay with the Jays and sign an extension (newest rumour going around).  2015 reference points: the Tulo trade took place on July 28th and the Price trade on the 30th.

Eric Sogard isn't in the lineup today - the official explanation is that he's getting the day off, but that isn't going to stop speculation that he's pulled because of an impending trade. Dun dun dunnnnnn.

Also, it's been reported that Thomas Pannone will be called up to start on Monday. Marcus Stroman will be pushed back to Tuesday, presumably to give management more time to put together an extension for him. Right?

Speaking of Tulo... wish him luck for a happy retirement.  After being on a potential Hall of Fame track in his twenties, it's been a disaster for him since turning 30.  I still have zero regrets over the Jays making that move as it was the first big domino to fall that ultimately resulted in a 43-18 finish in 2015 and back-to-back ALCS appearances.  My white Tulo jersey is going up on the basement wall-of-fame in my rec room along with the jerseys of Halladay (blue), Buehrle (blue) and Bautista (Canada Day red), and the EE parrot t-shirt.


I THINK WE'VE FOUND OUR NEXT KEVIN PILLAR:

A couple of nice tweets:

We’re so excited to have 8-year-old Ashlynn at the ballpark tonight! 👏

That special moment when you meet your favourite player ❤️ 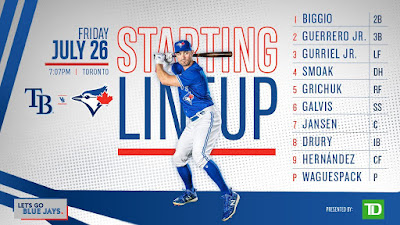 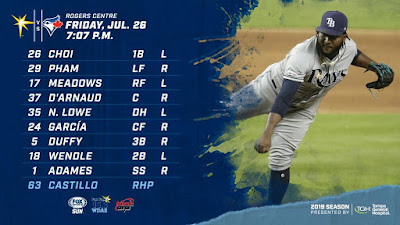