The Blue Jays open a three-game series against the oriLOLes with the opportunity to open up an even bigger gap between these two teams in the epic struggle for fourth place in the A.L. East.  This is also the final series before the All-Star break, which hopefully won't destroy the offence's momentum where they've scored 5+ runs in 14 of their last 15 games and 16 of 18 overall.

Aaron Sanchez looks to further torpedo what little value he has left and to send his agent deeper into fits of apoplexy as he takes the ball tonight.  He's 0-10, 8.52 in his last 12 starts with his last win coming on April 27th.  He'll go up against Dylan Bundy, who is 2-1, 5.01 in five appearances (four starts) at Rogers Centre.

Jonathan Davis has been called up and Thomas Pannone sent down.

It's been announced that Marcus Stroman won't pitch again until after the All-Star break, including in the ASG. Looks like Ken Giles will get the call, after all.

From John Lott at the Athletic ($):  Danny Jansen talking proud about his hitting, for once.

George Bell is in the house tonight.  First 15,000 fans tonight will receive a George Bell replica jersey and he'll be there to sign autographs.

There were no airports in 1775, you hare-brained orange ignoramus.  (sorry, had to get that one out of my system) 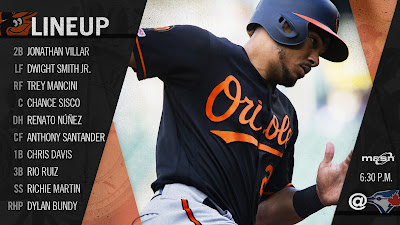 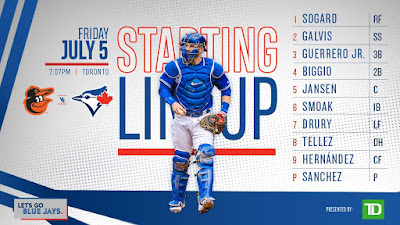