Last night, the Blue Jays looked like they were getting blown out of the ballpark before the offence made things interesting in the 8th and the bullpen did a fine job once Thornton and Sammy G were out of there.  Tonight is game two of a four-game set as the Blue Jays look to put out repeated fires on the mound set by their pitchers.

Jacob Waguespack has been called up to pitch in tonight's game.  He'll face Andrew Cashner, who will be making his debut as a Red Sox.  Here's hoping he brought the oriLOLes karma along with him -- for his career in Fenway Park, he's 0-1, 7.20 ERA.

The Edwin Jackson Experience has apparently come to an end in Toronto, depending on how things unfold as he has been DFA'ed.  Nice reward for throwing three shutout innings, after being kept around when he was serving up rockets on a platter.

In EJax's place, Jacob Waguespack has been called up to start in tonight's game.

One of our posters, Ted, saw a blue jay in his yard today.  They're winning tonight, book it.

Congrats to Freddy for this, didn't even know this was such a thing...


I know, I know... it's a Red Sux player, but thought this was worth sharing:

Brock Holt of the @RedSox is a world champion and @MLB All-Star, but the role he's played for children at the @DanaFarber Cancer Institute's @TheJimmyFund may be even more impressive.


R.J. Anderson of CBS Sports outlined the one trade that every team should make (link here), and this is what he had to say about the Blue Jays:
"Blue Jays trade Marcus Stroman to the Astros for a prospect package, including an upper-tier one: The Blue Jays continue to transition to a new core, and while they should consider re-signing Marcus Stroman, we think a trade is more likely. Dipping into Houston's system and trying to net Kyle Tucker (trying being the key word) would be an all right consolation prize."

That, I can live with.  Better than any deal with the damn Yankees. 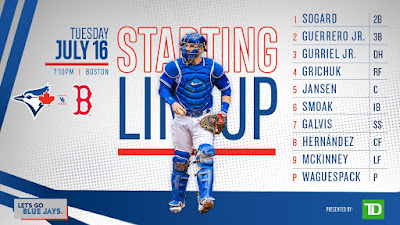 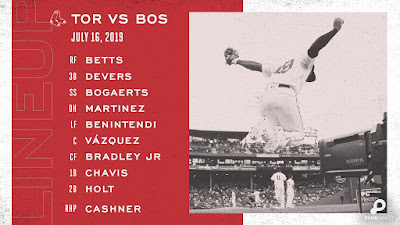