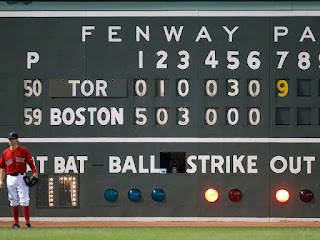 The Blue Jays had a nice hitting day in game two of this series, tallying up 10 runs off Andrew Cashner and a few relievers.  They look to maintain this momentum in tonight's game 3.

Aaron Sanchez takes the ball as he continues his utterly lost season, while he'll face Eduardo Rodriguez for the Sox.  E-Rod is eminently hittable (hint, hint to Blue Jays batters - he was the SP on that day when Dustin Pedroia was attacked by blue jays on the way to a 10-0 lead; this happened two days after the scoreboard game at the top of this post) and is a career 3-4, 4.80 in 12 starts against the Jays.

If there's a bright light for Sanchez, the last time he did not lose a game when he started was against the Red Sox on May 22nd when he went 6 innings, giving up 2 runs on 4 hits and 2 walks in a no-decision.

The Blue Jays have swung a minor trade -- Wilmer Font was picked up from the Mets for cash considerations.  I suppose he'll be useful filler to take over the get-my-ass-hammered role (not the urban dictionary version) from Edwin Jackson once Marcus Stroman is traded.

Just pretend that Ted saw a blue jay in his yard again.  We're gonna win this game, book it.

It's National Hotdog Day.  Let the debate/arguments begin (I say yes in the same way that a hamburger is considered a sandwich - come at me, folks):


Advance heads-up:  I won't be able to do game threats from July 28 to August 10. Please consider helping out by signing up to do some game threats so MK doesn't have to do them all. 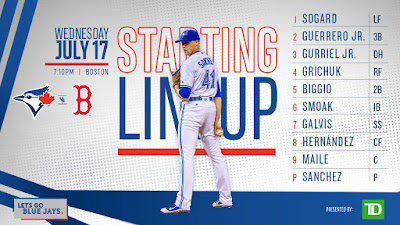 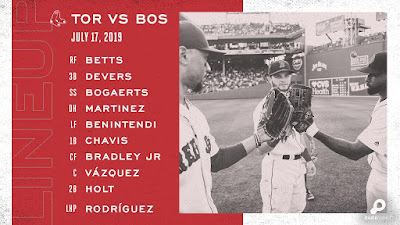 This is your "calling it, Sanchy's gonna break his streak" game threat.
Posted by macgyver13 at 5:46:00 PM