The Blue Jays wrap up a four-game series against the Royals in this Canada Day afternoon matchup, looking to win the series after taking the first two games and then losing the third game. Fourth time in a row they had a loss where the tying or winning run was on base in the 9th inning.

Clayton Richard is still searching for his white whale as he takes the ball for the Blue Jays, all adorned in Canada Day red.  He'll face Glenn Sparkman, an one-time Rule 5 pick up by the Jays who spent half of the season in the Jays system and made two MLB appearances (7 runs in one inning for a 63.00 ERA) before being returned to the Royals.  Say, don't we have a need for some useful pitchers on our current roster...?

Stroman is off to the All-Star Game:


If you need a reason to like Nick Kingham:

To all of my new North Of The Border fans, Happy Canada Day!! Beyond proud to represent the entire Country when I put on this Toronto uniform. pic.twitter.com/QdDVoFhxQY
— Nick Kingham (@NickKingham) July 1, 2019

Welcome to our #CanadaDay Spelling Lesson! 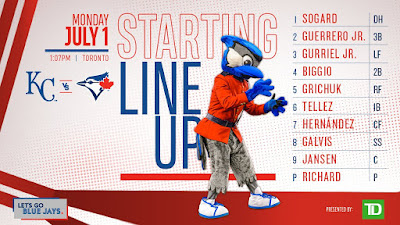 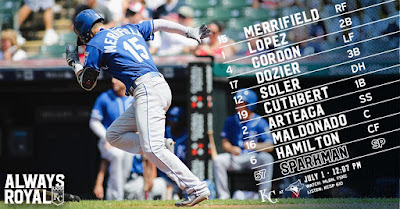