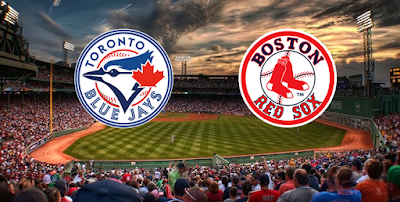 After making things interesting once again in the late innings, the Blue Jays look to recover and pull out a split of the four-game series with a win today.  After this game, the Jays fly to Detroit to take on the Tigers.

In this afternoon's finale, Thomas Pannone has been brought in from Buffalo to save the day for the Jays.  He'll go up against Chris Sale, who has been struggling all season to rediscover his form and is 0-3, 4.79 at Fenway Park in nine starts this year.  The Blue Jays have scored 14 runs in 14.2 innings (three starts) against Sale in a bizarro 2019 - good against Sale and meh against just about everyone else.

Nick Bingham has been designated for assignment to make room for Thomas Pannone.  Pannone's flight to Boston was cancelled by bad weather so he ended up using a car service for a 6+ hour trip ... and he's at Fenway, ready to go.

Vlad Jr. is batting sixth today. Good, take some pressure off the kid and just let him hit his way out until his confidence is back.

Rafael Devers has been destroying Blue Jay pitching in 2019, with a seasonal franchise record 25 RBI in 14 games against the Jays.

Nice to see Ken Giles back on the mound -- his rustiness was evident, but it should be reassuring to potential trading partners to see him on a mound again.

Teoscar has 45 career home runs.  11 have come against the Red Sox.

If you're a fan of the Sheepdogs, check this out:

AUG 9 TORONTO we'll be suiting up to join our pals the @BlueJays to face off against the @Yankees. Playing a full set outside the game at 5pm before throwing out the first pitch. Grab tickets to the game and join us for what’s always a fun time. Info here: https://t.co/LvMG7HGkMf pic.twitter.com/UH3XVihaBm
— The Sheepdogs (@TheSheepdogs) July 17, 2019 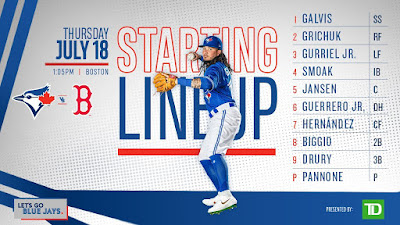 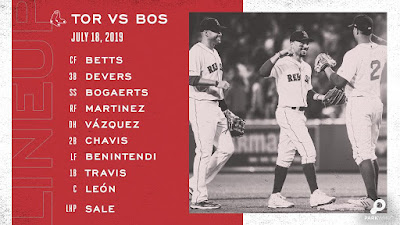