It's nice to get this road trip off to a positive start after an important win yesterday -- the mood would have been quite different if the Jays had gotten swept by the Rougned Odors.

Today, the Jays look to continue their winning ways in what could be a rather important series as the Twins, along with the Angels and Yankees, look to be the main competitors for the two wild card spots, assuming Boston/Cleveland/Houston all win their divisions as many expect.  This is the Jays' chance to bury the Twins for the next month or two at least.  Do it, boys.

Breaking News!  Randal Grichuk has gone to the DL and Gift Ngoepe has been called up.

This is the first Blue Jays series in Target Field without that noted ballpark slayer, Jose Bautista.  How will the new-look offence do without that multiple-dinger production we got used to seeing over the years?

Other than Bautista going berserk at Target Field on occasion, what memories do you have of watching the Twins in Minnesota over the years?  It could be any Twins situation or it could be something involving the Jays.

I still have nightmares of the time in 2014 when the Jays relievers just could not throw a damn strike and they walked roughly about 22,078 batters in one inning.  Steve Delabar, Sergio Santos (3 BB and 3 wild pitches), and JA Happ (remember him?) combined to make an ugly mess of an inning where eight consecutive batters either walked or bunted to move runners around. 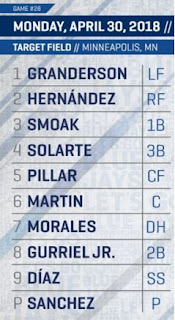 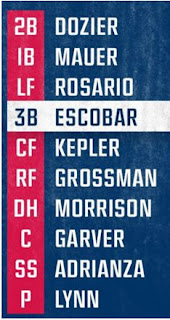