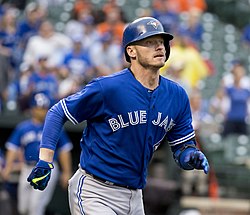 Josh Donaldson hit a grand slam in the 9th in the Blue Jays 7-1 rout over the Orioles. He also played 1st base for the first time since 2012

After winning the weekend series vs. Texas, the Toronto Blue Jays opened a 3 game series vs. divisioin rivals Baltimore Orioles. Baltimore won the season series 12-7 in 2017. The Orioles come into the series looking to gain some ground in the AL East after a tough 4-6 record through their first 10 games. Here is tonight's game recap.