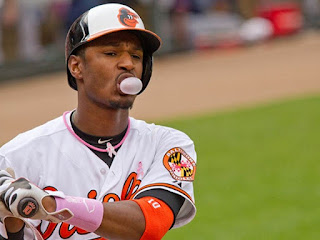 Adam Jones was 2-5, including the go-ahead grand slam in the 5th as the Orioles came from behind to defeat the Blue Jays and sweep them for the first time since September 15-17, 2014

Welp, that was quick. Word came out this afternoon that Josh Donaldson injured his calf (again) in last night's rehab game. He was pulled after five innings, apparently scheduled, and came in this morning feeling sore. This pretty much eliminates any chance he is traded by Friday. But, let's focus on the big league team that's actually playing. Tonight, the Blue Jays were looking to get back on track and snap the three game losing streak. Ryan Borucki, rookie phenom, was on the mound hoping to play stopper. Billy McKinney was the latest player to bat lead-off. Devon Travis, Steve Pearce, Curtis Granderson, Lourdes Gurriel Jr., Teoscar Hernandez, Randal Grichuk, Dwight Smith Jr., Yangervis Solarte, and Russell Martin have all batted lead-ff at least once with varying success. Could the Blue Jays win again? Here is tonight's game recap.