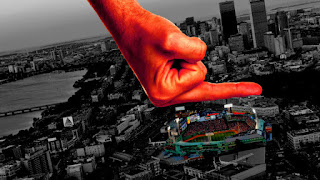 It's the Sux home opener, so we'll have to sit here and watch them get their rings and drone through 30 minutes of ceremonies before the game starts. Why is it we're always the opposition when teams get awarded their WS rings? And of course, they activated Rat-Face for this series. Greasy Clay is there too - he'll be making his first Jays start on Saturday.

However, it is a history-making day...

"I believe Alex Cora is the guy...The way they play the game now, he was ready for that. And Charlie Montoyo is ready for that. So all the Latinos can get ready for that.” On Cora/Montoyo meeting's significance, opening doors & opportunity: https://t.co/9D34tukzjv #BlueJays
— Shi Davidi (@ShiDavidi) April 8, 2019

Nothing to see here:

Luke Maile was slated to catch Matt Shoemaker today but he also is fighting tightness in his neck. Montoyo hopeful he loosens up enough to be available if needed in game.
— Shi Davidi (@ShiDavidi) April 9, 2019

Cavan Biggio, five games into his MiLB season with @BuffaloBisons:

Oh look! It's the return of the product placement lineup!


And in old friends news:

Yes, exclusive! Meaning Birds All Day is moving behind the paywall. For our existing Patreon subscribers, watch your inboxes soon, as you’ll be offered a free year of the Athletic (or a free year’s extension if you’re already a subscriber) as a thank you for your support. ...1/x https://t.co/wQ3jX2ROiz
— Andrew Stoeten (@AndrewStoeten) April 9, 2019

Congrats Drew and Andrew!
Posted by mktoronto at 1:00:00 PM