There was the offensive explosion we had been waiting for all season long - 10 runs on 15 hits with the game in cruise control when the Athletics finally got their one run. It was what could be seen in some corners as a Pyrrhic victory in that Matt Shoemaker went down with a potentially serious injury.

Aaron Sanchez takes the mound for the Blue Jays as the team looks to pay back the Athletics for their season sweep of last year by starting one of our own.  He'll go up against Brett Anderson, who (like Shoemaker) is multi-talented and a ticking time-bomb for injury.

1 roster move to announce:  Shoemaker has been put on the 10-day IL and Richard Urena has been called up.  Still awaiting the MRI results on Shoemaker's knee, but even if it's good news, it still makes sense to give Shoe a few days to recover. Not much baseball talk to say for now, but hope everyone is having an happy Easter and enjoying a huge sports day for Toronto fans with the Raptors and Leafs fighting to maintain control and win playoff series, respectively.

Go Jays go - who'da thunk they'd be 5-1 on this road trip against good teams after such a rough start offensively?  I'd like to think this all came about after Charlie threw a temper tantrum during the opener of the Twins series and reamed out Teoscar and Drury for their fuck-up on the bases; they've been hot since then. 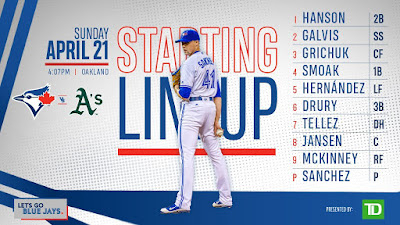 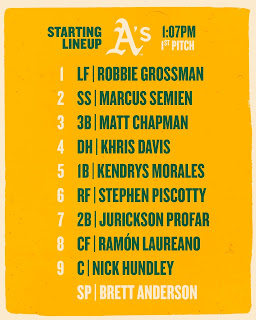 This is your "we gonna go a-sweepin' this afternoon" game threat.