The Toronto Blue Jays return home after a massively successful road trip where they went 6-1 against two solid teams (Minnesota, Oakland), and they look to continue that momentum as they take on the San Francisco Giants at the Rogers Centre.

Trent Thornton looks to rediscover the form displayed in his first two starts and secure his first major league win.  He'll go up against Jeff Samardzija, who has owned the Jays in his three previous starts against them (2-0, 0.39).  Pretty numbers like that are meant to be messed up!

Roster updates:  Matt Shoemaker is out for the season with a torn ACL. *tears*  Aaron Sanchez appears set to pitch on Friday, even with the broken fingernail.  Don't be surprised if he goes out for a few innings then it worsens and he'll be out for a while.  I'd like to be wrong on this, but...   Also, more bad news on the injury front as Bo Bichette has a broken hand after being hit by a pitch yesterday - he's going for a second opinion before a decision is made for his recovery.

Superman returns!  Yes, Kevin Pillar is back in town to take on his old buddies.  This is one where a good, solid ovation will likely be given without any boos.  Just save your offensive production and superman dives for after you leave Toronto after this series, mmkay?


As alluded to above, the Giants almost became a Toronto team.  In 1976, there was a deal from the then-owner of the Giants (forget his name) to sell the team to a group in Toronto and then move the team north to become the Toronto Giants.  The deal eventually fell through because of a court ruling, and the team was then sold to Bob Lurie, who kept the team in San Francisco.  The Toronto group had already started renovating Exhibition Stadium in anticipation of bringing over the Giants, so they pushed MLB for an expansion team and were granted one later in 1976 to start play the following season.

*considers* ... nahh, I'm happy with the way things turned out where we got an expansion team instead of the Giants.

Looks like some of the Giants players and team staff had some fun in the Toronto area, making the most of some free time to kill (click to enlarge the pics within): 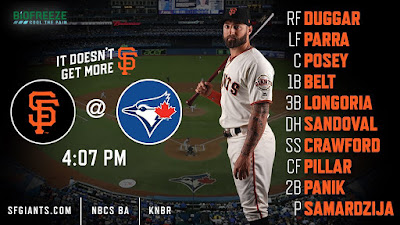 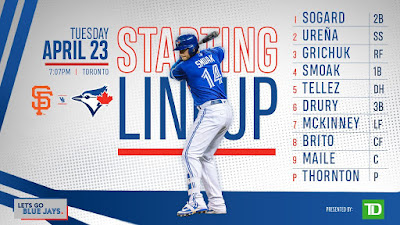