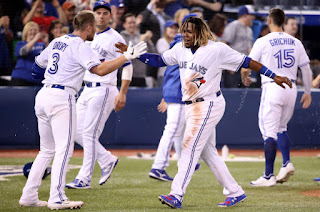 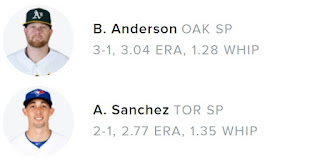 A bit hyperbolic with the info above?  Perhaps, but it certainly felt like there was an unnamed cast of thousands out there on the field beside the one guy that everyone came to see.  Yesterday's game didn't disappoint for some happy drama with a Drury walk-off coming after Vlad's first hit, a double, in the bottom of the 9th inning.

Aaron Sanchez takes the ball today, going up against Brett Anderson in a matchup of starters who left their most recent starts with injury (Sanchez - broken finger nail, Anderson - ankle sprain).  Can they stay healthy long enough to turn in a decent pitching matchup?

What can you say about yesterday's game?  It was easy to see why Vlad Jr. warranted the enormous hype, and he didn't disappoint.  Hard-hit grounder to Kendrys, drilled one a foot short of a HR, hit another one to right-center in front of the warning track, and a double in his four at-bats.  What was notable is that he didn't fully barrel up on any of these four balls put in play, yet he almost hit one out.  On the double for his first major-league hit, you could see he was trying to kill the ball his first swing, then when there were two strikes on him, he choked up on the bat a bit and just focused on putting the ball into play -- his baseball IQ was in clear display there and it's easy to see why he should be a perennial .320 hitter with power (just like his dad).  Hopefully this rubs off on the rest of the team to adjust their approaches to the situation at hand.


In case you were living in a cave or you were unable to catch the game on TV, here's Vladdy's first hit:

Canada, you’re electric. It’s an honour to pitch in front of y’all at Rogers Centre. I know everyone is locked in from coast-to-coast in this beautiful country. Keep bringing that energy all year. We need it and love it! @BlueJays 🇨🇦
— Marcus Stroman (@MStrooo6) April 27, 2019 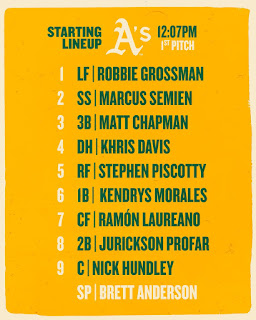 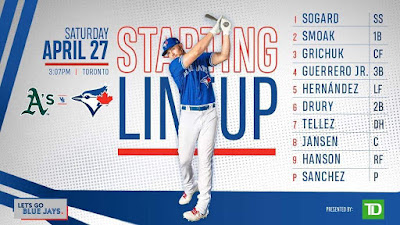 This is your "surviving the first-game hangover" game threat.
Posted by macgyver13 at 2:00:00 PM