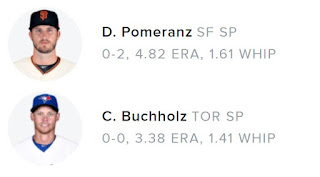 The Blue Jays' four-game winning streak came to an end with a 7-6 loss yesterday.  Today, they look to gain a series split against the San Francisco Giants before enjoying a day off and then welcoming the Oakland Athletics to Rogers Centre for a series that could very well see the debut of Vladimir Guerrero Jr.

It's a battle of former Red Sox teammates on the mound in today's afternoon game -- Clay Buchholz takes on Drew Pomeranz.

Pity we won't get to see Madison Bumgarner in this series.

It's getaway day for the Giants.  Jays get to go bowling or golfing or whatever teams do to unwind on an offday at home.

Beat those Giants, don't let Pillar fly out with a feeling of utter satisfaction and saying, "hah, beat these fuckers!" 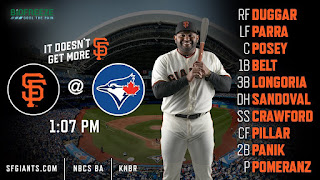 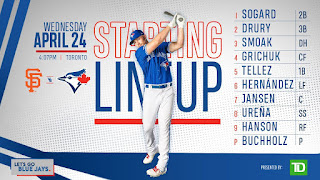