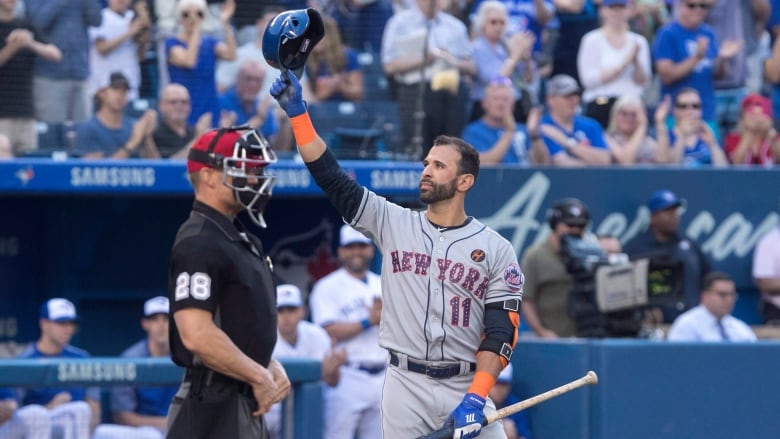 Jose Bautista salutes the crowd Tuesday. He played what might have been his final game in Toronto Wednesday. The Mets doubled up on the Blue Jays 6-3 Wednesday.

The Blue Jays received some somewhat promising news today with an MRI finding only a mild strain of the glute muscle for starter Marco Estrada, who left his start yesterday after facing just 4 batters. With two starters, Aaron Sanchez and Jaime Garcia, already on the DL, the Blue Jays can ill afford to lose a third starting pitcher. Tonight, Marcus Stroman was making his third start since coming off the DL himself. Tonight's game also potentially marked the last time Jose Bautista played baseball in Toronto. Here is tonight's game recap.

Email ThisBlogThis!Share to TwitterShare to FacebookShare to Pinterest
Labels: game recap, NY Mets, Toronto Blue Jays
opinionator777
I am a graduate from SFU with a major in psychology and a minor in Health Sciences. I am a huge advocate for children w/ Special Needs. I'm a huge Canucks fan. As well I love watching baseball in the summer. I have an 8-year-old Havanese-Shih Tzu
Newer Post Older Post Home