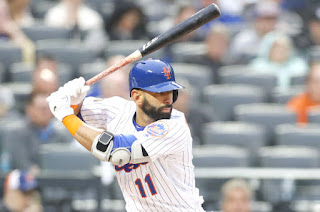 This is the second of a two-game series for the Blue Jays against the New York Mets, and the Jays are looking to complete the sweep and win the season series.

This could very well be the final time we ever see Jose Bautista in uniform, depending on how much longer he intends to play and how the interleague schedule unfolds in future seasons.  Game 1 was a mixed bag for Joey Bats - huge ovation prior to the game and during his first at-bat, then had a single and three walks in five plate appearances, but then helped the Jays get back into the game by committing a Bautistian error in letting Grichuk's ball go by him for a two-base error during the five-run inning that started the Jays comeback.

This would be a nice time for Marcus Stroman to turn in a boffo performance to take the load off the bullpen after yesterday's 12-pitch outing from Marco Estrada.  The Mets counter with Corey Oswalt (no relation to Roy) who will be making his second major-league start.

Also:  Jose Reyes is in tonight's lineup for the Mets.

Roster moves!  Get 'em while they're hot!


A great article from John Lott where he reflects on covering Jose Bautista over the past ten years (from The Athletic):
Lott on Bautista

Thanks to Smasher for bringing this over from Twitter:

Happy 4th of July to our friends across the border! pic.twitter.com/QztvICQ8QM
— Toronto Blue Jays (@BlueJays) July 4, 2018 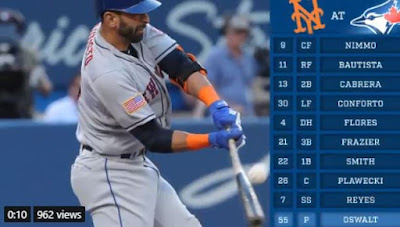 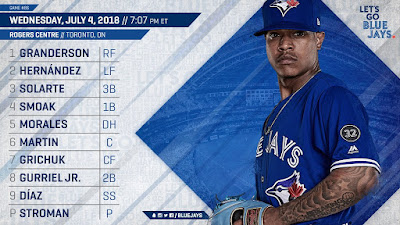