The Blue Jays roll into Atlanta for a quick two-game interleague series against the NL East-leading Braves.

In March, tonight's pitching matchup would have looked like a dandy with Stroman going up against Teheran.  Now?  Mehh.  Both are having a tough season so far.  Last year, these two faced off and Stroman smoked a dinger off Teheran en route to a 9-0 Jays win.  One of our own posters has predicted another HR for Stroman tonight.

This will be Marcus Stroman's 100th career start as a Blue Jay.  Let's find out where he ranks:


How stunning was it, Devo?


Get ready, Buffalo.  Vlad Jr. is on his way there as soon as he's ready to come off the DL - he'll likely get a rehab tuneup in Dunedin, but it appears that his days as a Fishercat are over.

Conga-rats to J.A. Happ on becoming a first-time All-Star.  Not his finest season but easily the most deserving Blue Jay this year.

Speaking of first-time All-Stars... it's nice to see this: 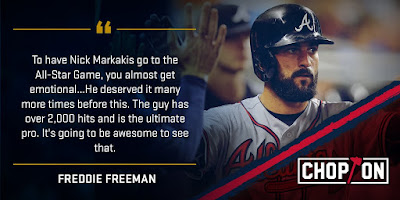 Want Joe Carter and Robbie Alomar to play for your summer league team?  Here you go...

Make @JoeCarter_29 and @Robbiealomar an offer and they could play for your summer team! Here's what you need to include to enter:
1. Follow us
2. Tag @BlueJays
3. Use #BudHomeRunContest.


Friendly reminder that I won't be available to do game threads as of Saturday for a whole month-plus.  I can do Thursday's and Friday's threads for the Red Sox series. 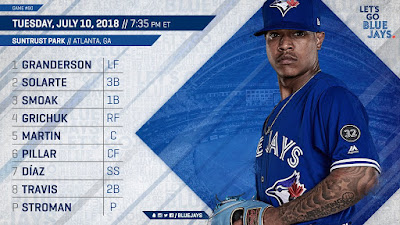 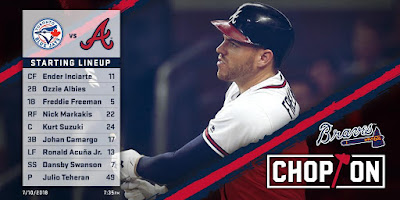