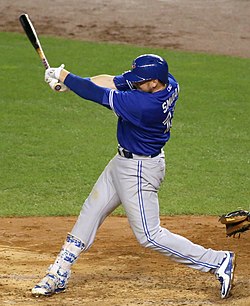 Justin Smoak was 2-3, including a solo HR to help lead the Blue Jays to a 3-1 win over the Braves
After a suboptimal road trip that saw the Blue Jays win just once in 6 tries, the Blue Jays returned home to start a week of reunions. Tonight, Josh Donaldson made his return to Toronto, playing in the 6ix for the 1st time since the 2018 trade deadline deal to Cleveland (he signed with Atlanta in the off-season. Tonight's starter for the Braves was Canadian righty Mike Soroka. Freddie Freeman, who's parents are Canadian is also playing in this series, as is Vlad (born in Montreal when his father was playing for the Expos. Alex Antropolous, who was largely responsible for building the 2015 and 2016 Blue Jays teams, is also back in town. Tonight, the Blue Jays had another bullpen day with Wilmer Font getting the ball first. The infield of the future (and present) was playing tonight with Rowdy Tellez at 1B, Cavan Biggio at 2B, Bo Bichette at SS and Vlad occupying the hot corner. Reese McGuire got the start behind the plate. Could the Blue Jays snap the 1 game losing streak? Here is tonight's game  recap.
Game Highlights