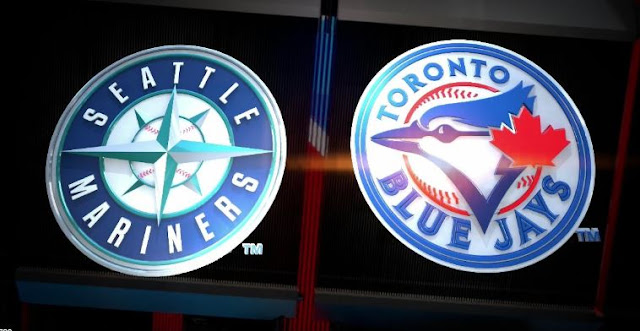 Rather than blather on and on, let's simply look at a pic or two and get straight to the point!

These three cards are interesting because they remind us that baseball is, in a way, sort of random.  Phelps was a can't miss power hitter who ended up missing.  Carpenter was a mediocre starter for the Jays for a number of years before he was given up on, only to become a star once he left.  I was fully on board with letting him go.  Lawrie set the world on fire when he came up with the Jays but he was never able to keep it together and he ended up flaming out.

I've spent a lot of years reading Jays blogs and sites, as well as various other sources, and one of the common themes has been the failure of great, can't miss prospects.  It's like this for every team.  What does this mean?  It's all a crap-shoot, there's no point trying to predict what will happen, and we might as well not watch in the first place.  Why bother when we know the Jays will ultimately fail?

I absolutely, steadfastly, refuse to watch Blue Jays baseball for at least three years!  I won't watch any games on cable, satellite, MLB.TV, at sports bars, any illegal streams, or any other method yet to be devised.  I absolutely, 100% refuse to listen to games either.  I will remain resolute in my convictions and will even avoid reading about the Jays on any form of printed or electronic media.

I cannot be induced, by any means, to change my mind!  mk, please shut down the site - this will be the last post.  It's been a good run but it's time to close it down.  I urge all readers to join me and stay away in droves!  Don't give even one more cent of your hard earned money to the Blue Jays, Rogers Media, or any other entity that benefits from Blue Jays baseball.

I will paste in the lineups below only to fulfill my final obligations, and will even add some daily commentary, due to contractual reasons.  However, this is goodbye.  Goodbye Forever!