After splitting a well-fought, four-game series against the Yankees, the Blue Jays welcome their old post-season rivals, the Texas Rangers, to town for a three-game set.  Both teams are coming off 1-0 games; the Rangers won theirs and the Jays lost theirs.

Newly-acquired Neil Ramirez will open the game for the Jays in his debut with the team.  He'll face off against Ariel Jurado, who was the losing pitcher when the Jays won 1-0 in 12 innings earlier this season.  Thanks for the throwing error to bring in the only run of the game and save both teams' bullpens from further extra innings, Jurado.

Freddy Galvis has been claimed off waivers by the Cincinnati Reds.  In a corresponding move, OhBilly McKinney has been recalled from Buffalo.

Jason Adam was the one fingered for the Buffalo Shuffle with the Neil Ramirez addition to the 25-man.

Good news, Toronto fans of the Cincinnati Reds and Joey Votto!  Blue Jays subscribers were emailed the Reds' 2020 schedule instead of the one for the Blue Jays.  For the rest of us, here's the Jays schedule for 2020:

Which games are you most excited for? #LetsGoBlueJays
— Toronto Blue Jays (@BlueJays) August 12, 2019

As could be expected, there were plenty of acerbic comments in response to the question of "Which games are you most excited for?" with the leading commentary focused on the longevity of Shapiro (don't faint, Oak).

It's been a while since I posted some fun facts from the mind of Jayson Stark, so here goes... 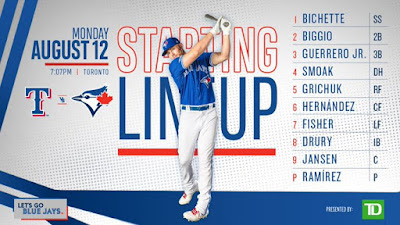 And... a VOMIT ALERT:  The Rangers just had to put that lil fucker's pix on their lineup? 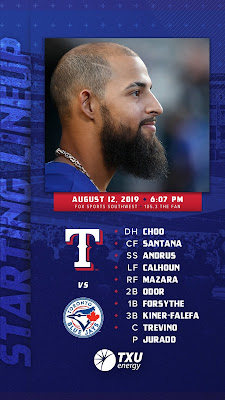