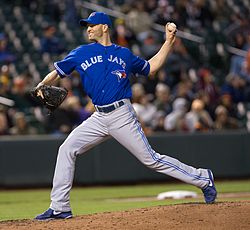 Two wins in ten games. This is the Blue Jays current situation after being swept by the A's, and winning single games in series vs the Red Sox and the Mets recently. The Blue Jays next three series are against Shohei Ohtani and the Angels, the surging Philadephia Phillies, who are 27-17 after Sundays games and the Boston Red Sox. On that happy note, here are ten random thoughts from week 7 of the MLB.

1. The impact of an over-worked bullpen and the loss of Roberto Osuna for the foreseeable future is having a bad impact on the Blue Jays. On Thursday, the Blue Jays used 6 relievers and they gave up a combined seven runs on nine hits and 2 walks. On Saturday, the Blue Jays had a 4-0 lead going into the 8th inning. John Axford came in and gave up a run scoring single. Tyler Clippard relieved him, walked Jed Lowrie then gave up a grand slam to Chad Pinder. Game over. The Blue Jays could not get the tying run across the plate. The Oakland A's reliever's did a phenomenal job this weekend. They lost their starting pitcher in the first two games early to injury. On Thursday, the 4 A's relievers combined to allow 4 runs on 6 hits and 5 walks. On Friday, they were even better. Starter Brett Anderson left after pitching just one inning. Five relievers combined for 1 run on 4 hits over 8 innings. They also struck out 15 Blue Jays batters. It is imperative that the Blue Jays get more length out of their starters to preserve the bullpen and allow them to be more effective with better rest.

2. Speaking of Osuna, more details emerged this week on the restrictions he has against him. Osuna is currently on administrative leave while the MLB investigates the allegations.This issue has divided fans. Some want the Blue Jays to trade Osuna as his reputation is tarnished; others feel he should be given another chance. I'm in the boat where let's see what these allegations are. Osuna has yet to make a court appearance and he should have the opportunity to defend himself. The Blue Jays should support him and his girlfriend as they work through their issues. It's unfortunate that he may have harmed his girlfriend physically. This is certainly a big life lesson for Osuna to learn and hopefully he is a better person for it.

3. The Blue Jays offense has gone cold in recent games. In April, the bats were hot and carrying the Blue Jays to victories. After Saturday's games, Kevin Pillar and Luke Maile were the only Blue Jays regulars batting over .300. The players held a player's-only meeting this weekend. However, the only way the team is going to get out of it's current funk is through repetitions and being more selective at the plate. The more pitches a batter sees, the more information they will have on a pitcher. Also, they need to stop swinging at balls out of the strike zone.

4. Speaking of strike zones, the umpiring has been very inconsistent lately. Oakland A's manager Bob Melvin was yelling at home plate umpire Tripp Gibson III, who called a very small strike zone. The inconsistency of umpiring game to game makes me want to see technology developed and used that will call balls/strikes. Obviously umpires would need to be used to in the event the technology failed.

6. Voting for the all-star game has begun. Currently, the only Blue Jay who deserves a chance to play in the all-star game is starting pitcher JA Happ. Happ is 5-3 with a 4.15 ERA.Tyler Clippard is another possibility but he gave up a grand slam on Saturday. Kevin Pillar is the best Blue Jay offensively but there are better center fielders in the AL, who would likely get the nod over him. The All-Star game is 2 months away and there's still lots of time for a Blue Jay to prove they deserve to represent the team in Washington on July 17.

7. In the ouch department, Mets outfielder Juan Lagares was lost for the season after running into the wall on Wednesday in the 8th inning of a blow out loss to the Blue Jays. On replay, the play looked so innocent. Lagares completely tore the plantar plate on his big toe. He will require surgery to repir the damage and be lost for the season

8. Here's an intriguing name that could be in the home run derby: Shohei Ohtani. The Japanese phenom has been DH'ing 3-4 days a week and pitching once a week. He has done well at both roles.  At the plate, he is batting .321 with 6 HR, a triple and 5 doubles. On the mound, he is 3-1 with a 3.58ERA. Should Ohtani win the home run derby, he would be the first part time pitcher to do so. The Blue Jays have the pleasure of trying to get Ohtani out next week. As he pitched on Sunday, he will not be on the mound for the three game series in Toronto.

9. The Atlanta Braves have released Jose Bautista. Could the Blue Jays try and sign him to a minor league contract? In 12 games, he had 5 hits in 35 AB. I mean he couldn't be any worse than Morsel could he? Plus, I'm sure Joey Bats would cost way less than the $11 million. Morales has 15 hits in 100 AB. Thoughts?

10. Blue Jay of the week: JA Happ. In a difficult week, the Blue Jay of the week honors goes to JA Happ who did it all in his start. He pitched 7 solid innings of 2-hit ball and even got on base three times himself, scoring twice and singling twice in a rainy, wet matinee. It's been so rare that a Blue Jays starter has managed to pitch into the 7th inning or later and the bullpen is starting to show signs of fatigue. Hopefully Happ continues his fine season on Tuesday.
Posted by opinionator777 at 7:00:00 AM