On Friday, the Blue Jays surprised a fair number of people by outlasting Chris Sale and his 15 strikeouts, gradually chipping away at him for three runs before they went into extras and then walked it off on a Luke Maile two-run HR.

Today, old buddies Marco Estrada and David Price go head-to-head on the mound.  More on the connection between these two further down in this threat.

After opening the season with two scoreless 7-inning outings against the Rays, Price has gone 1-4 with an 8.22 ERA and an opponent slash line of .309/.394/.543 since then in five starts.  The Jays need to strike while the iron's hot and take advantage of a sub-par Price.

Remember when many of us here were clamoring for some SP signings during the free agency period?  Well, the cream of the free agent pitching class of 2017, namely Yu Darvish, Alex Cobb, Lance Lynn and Jason Vargas, have combined for a record of 1-13 with a 7.81 ERA.  They're earning $57 million as a group this year.  In that light, Jaime Garcia looks like an astute signing by Shatkins.

Donaldson is at 110 and Smoak is at 101, so considering the rotation woes and the slow start of these two, I'd say it looks pretty positive for the rest of the season as the rotation and Dosh won't be this underperforming all season.

Hands up if you called Maile, Grandy, Pillar and Solarte to all outperform Donaldson and Smoak so far.  Yeah right, put yer hands down.


Curtis Granderson has come out with a cool shirt to raise funds for his Grand Kids foundation.  Awesome idea.


Grandy Man 🇨🇦 CAN t-shirts now on-sale! 100% of proceeds will benefit my #GrandKids Foundation. Available online (https://t.co/H9W0cTQk4n) & at @bluejays team stores at Gate 1, 5 and Eaton Centre! Tag me in your photos and include #GrandyManCan so I can like & share your posts! pic.twitter.com/9HhMi3jzo2

From Kaitlyn McGrath at The Athletic:  "I really like this robe": Marco Estrada remains sole devotee to the Blue Jays robes of 2015 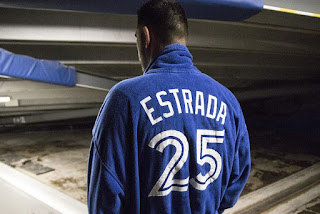 Just makes today's pitching matchup all the more interesting knowing about this link between Estrada and Price. 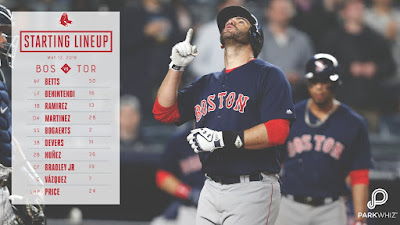 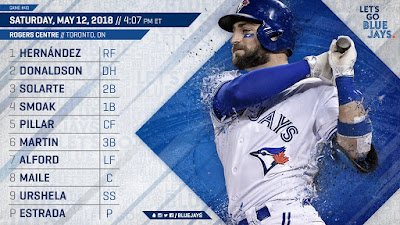