The End of the Montreal Expos Revisited 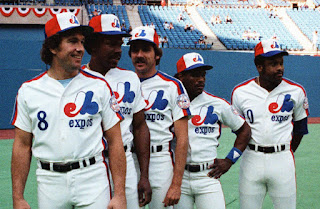 With the Toronto Blue Jays once again stopping by Montreal for a couple of exhibition games before the season begins, it gives us a chance to take a brief look back at Canada's first MLB franchise, the Montreal Expos.


In April of 1969 the Expos inaugural season got under way with their very first win over the Mets followed by a home opener at Jarry Park that saw the Expos down the Cardinals 8-7. Three days later in Montreal Bill Stoneman throws a no hitter against the Phillies. Good omens all around! Alas the Expos finished the year with 52 wins against 110 losses but Montreal and Canada had big league baseball.

It would take ten years of sub .500 ball before the Expos would achieve a winning season. In 1979, with their home now the concrete money pit known as 'The Big O', the Expos would finish with an impressive 95-65 record and the glory days had to be just around the corner. By 1981 the Expos finally got to taste play-off baseball albeit under strange circumstance. Due to a two month players strike the season was shortened and split in half with the Expos winning the second part of the season. After beating out the Phillies (winners of the first half) the Expos would go on to face the LA Dodgers in what would be the Expos first and only trip to a League Championship Series. On October 19 it was game 5 and the series came to an end with the Dodgers Rick (why were you ever born) Monday smacking the saddest ball in Expos history out of the park. The Expos could not respond and 'Blue Monday' was born.

Fast forward to 1994, the beginning of the end. It's the 12th of August and the Expos sit at a very impressive 74 wins to 40 losses. What could stand in the way of a 100 plus win season and a trip to the World Series? How about another work stoppage that wipes out the entire season.

By 1995 Expos fans had become so disillusioned by MLB and the exodus of Expos stars that attendance had taken a dramatic drop off. When Pedro Martinez was traded away on the heels of his Cy Young season (1997) the writing was on the wall and the fan's wouldn't buy it any more. Montreal had become a player development team for the league.

In 2000 new owner Jeffrey Loria had his hand around the throat of the franchise and there was no turning back. The Expos were no longer to be found on television and any hope of a new down town ballpark had faded. The Expos played their last game on September 29, 2004 losing to Florida in front of 31,000 fans. Oh the irony. 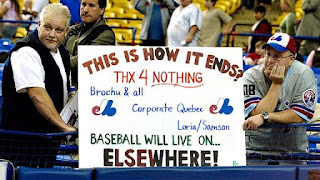 There are so many more reasons why this organization failed. The stadium and a roof that seemed to symbolically seal the teams fate. I can't remember if it ever did open properly after it was placed. Oh and lets not forget the falling concrete that sent the Expos on the road for so many games. An era of labour problems that did nothing to the fans confidence in the league. Towards the end it was shoddy ownership and MLB itself that dealt the final blow to a once proud franchise. They say timing is everything and the timing just never seemed to be there for the Montreal Expos.